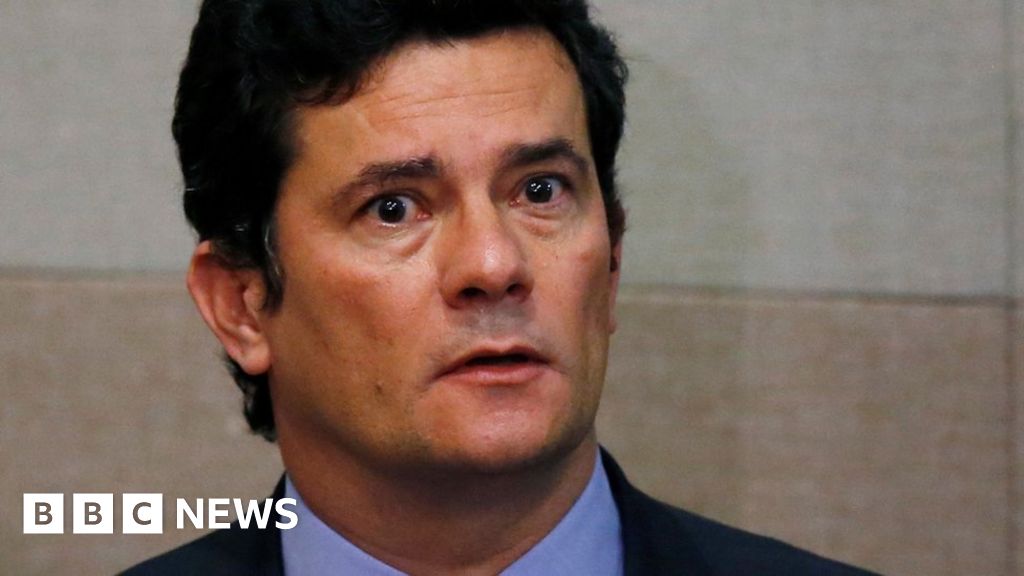 It comes after Justice Minister Sergio Moro resigned on Friday, accusing the president of wanting to install a new federal police chief who would provide him with intelligence reports.

The row has thrown his administration into turmoil as it struggles to address the coronavirus crisis.

How did the row develop?

Brazil’s public prosecutor Augusto Aras has now asked the Supreme Court to allow an investigation into Mr Moro’s allegations against the president.

On Friday Mr Bolsonaro fired federal police chief Mauricio Valeixo – an ally of Mr Moro – without publishing a reason for the decision. He was replaced by Alexandre Ramagem, chief of the Brazilian Intelligence Agency.

Earlier, on Thursday, Mr Moro had threatened to resign if Mr Valeixo was removed but then said he would stay if he could choose his replacement.

However he resigned on Friday, describing Mr Valeixo’s sacking “without a genuine reason” as “political interference that harms my credibility and that of the government”.

What’s the allegation against Bolsonaro?

Mr Moro alleged that the president was meddling in federal police efforts to fight corruption.

He said Mr Bolsonaro had told him he was replacing Mr Valeixo to install someone with whom he had “personal contact, whom he could call, ask for information, intelligence reports”.

“Providing this type of information is not the job of the federal police,” he said.

Mr Moro also alleged Mr Bolsonaro had said one reason for ousting Mr Valeixo was that he was “worried” about some ongoing investigations.

Firing Mr Valeixo was also “a signal that the president wanted me out”, he added.

Mr Moro is a popular figure in Brazil. He is a former judge who oversaw the country’s biggest anti-corruption probe, which uncovered billions of dollars of bribes and led to the convictions of dozens of high-profile business leaders and politicians.

The sound of pot-banging protests rang out in cities across Brazil after his resignation was announced.

How has Bolsonaro responded?

In a televised address, the far-right president called the claims against him “baseless” and said he could choose who he wanted as federal police chief.

“The appointment is mine, the prerogative is mine and the day I have to submit to any of my subordinates I cease to be president of the republic,” Mr Bolsonaro said flanked by most of his cabinet in the presidential palace in Brasília.

He also accused Mr Moro of demanding a nomination to the supreme court in return for agreeing to Mr Valeixo’s replacement.

Mr Moro has denied this, saying it was “never used as currency in exchange for me being named to” the top court.

Blow to the Bolsonaro government

The departure of Jair Bolsonaro’s most popular minister is a blow to his government – Sergio Moro was a star minister. He was seen by his supporters as an anti-corruption crusader.

It is a departure that Jair Bolsonaro has clearly taken personally too, judging by his 45-minute television address on Friday afternoon. He recounted being snubbed by Mr Moro at the airport a few years ago, and accused him of not caring enough after he was stabbed during the campaign in 2018.

There is no doubt Mr Bolsonaro looks weaker now than ever – the events of Friday mark one of the most dramatic days in Brazilian politics in recent years.

Many are wondering who will be next – will the likes of Paulo Guedes, his economy minister and another star member of the cabinet, remain loyal or jump to save his reputation?

All this drama is distracting from a more urgent crisis – the number of coronavirus cases and deaths are rising ever faster each and every day.

Seen as an anti-corruption crusader, Mr Moro was a star pick when Mr Bolsonaro asked him to join the government.

Mr Moro earlier oversaw a huge corruption probe known as Operation Car Wash, which exposed billions of dollars in bribes and ended in the jailing of many powerful businessmen and politicians, including leftist former President Luiz Inácio Lula da Silva.

He once said he “would never enter politics”, but later agreed to serve in Mr Bolsonaro’s cabinet in order to fight corruption and organised crime.

He was promised full autonomy for his department, which united the justice and public security portfolios in a so-called “super ministry”.