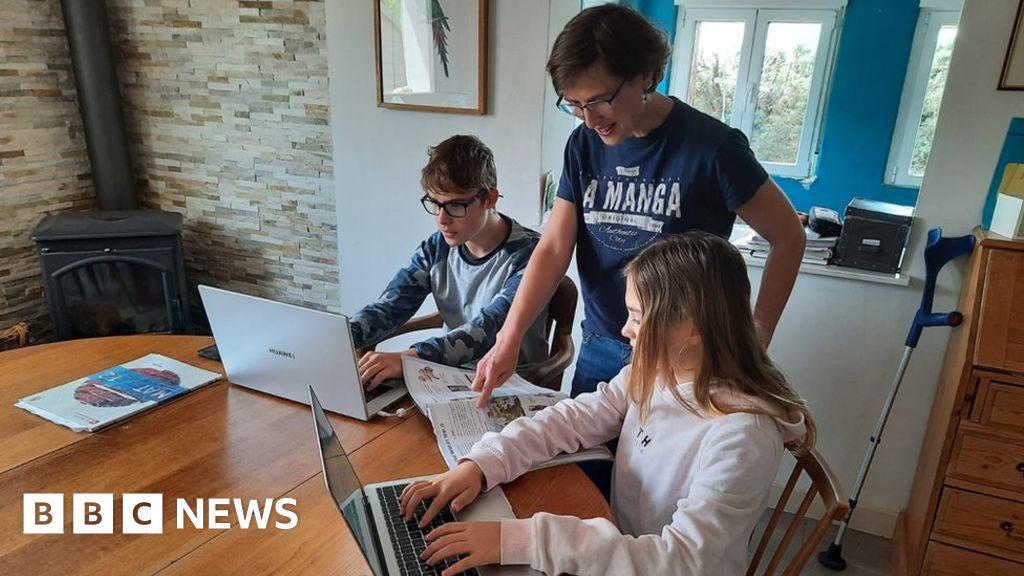 When Spain’s government announced a national lockdown in mid-March, in reaction to coronavirus, not everyone was dismayed at the prospect of spending several weeks at home.

Miguel Sánchez, a 15-year-old from Madrid, was delighted he wouldn’t have to go to school for the foreseeable future.

Six weeks later, having not left the family’s flat once, the lockdown has lost some of its shine for him and he still does not know when he will be able to go out.

Restrictions have been partially lifted for children under the age of 14 for the first time. That means Miguel’s younger brother, Jaime, can now go out each day. But Miguel cannot.

‘He misses his friends’

“It does bother him, because he says ‘Why can my brother go out and I can’t?’,” says their mother, Cristina Carrasco, a primary school teacher.

Miguel has spent much of the time inside doing school work. In his free time he has been playing video games and watching films with his younger brother.

“Being a teenager, he really misses seeing his friends, going out and having contact with other kids of his age,” she says. “Miguel is a good kid but teenagers have good days and bad days.”

What has changed for Spanish children?

The new lockdown conditions allow Spain’s 6.3 million under-14s to leave their homes each day for a total of one hour between 9am and 9pm, but without going further than a kilometre.

Bicycles, skates and skateboards are allowed, but public parks remain off-limits. The lockdown’s other conditions remain in place for the moment, with the government considering loosening it further in the second half of May.

Psychologists have welcomed the lifting of restrictions for smaller children, saying that even one hour outside each day can provide an important boost to their state of mind.

“The change of routine, being outside and being in the sunlight – all of that is extremely important,” says Laura Piñeiro, a psychologist and the director in Madrid of the charity Asociación Bienestar Desarollo (ABD).

“There are people living in 40sq m (430sq ft), who don’t have sufficient ventilation or light. If you’re living in a limited space, when you go out in the sunshine that generates a feeling of well-being,” she says.

For the majority of children aged 14 and over in Spain that particular source of well-being remains out of reach.

What about older children?

Health minister Salvador Illa has pointed out that those over 13 are allowed to carry out errands for their parents, as has been the case throughout the lockdown.

However, parents tend to prefer not to send their children out, especially to enclosed places such as supermarkets, where there is more risk of contagion.

Meanwhile, technology offers teenagers a form of virtual social life, via mobile apps such as WhatsApp and social media, but it is not the same as human contact.

Ms Piñeiro says the frustration that confinement causes children can easily lead to family conflicts. Teenagers, in particular, need a degree of autonomy in the home, she believes.

“Being enclosed and under the gaze of their parents means they don’t have the basic freedom they would like.”

Greater freedom for pets than kids

The debate surrounding how movement is handled has intensified as the lockdown has progressed.

Critics of the Socialist-led government have pointed out that dogs, which have been allowed to be walked throughout the crisis, have had more freedom than children.

Opposition leader Pablo Casado said that in millions of homes, youngsters were “climbing the walls”.

There was a backlash when the government initially announced a more timid easing of restrictions for children, before presenting the current, more liberal policy.

However, not everyone agrees that the last six weeks have been so tough for Spain’s kids.

“Children adapt to new circumstances much better than adults,” says Susana Fuertes, the mother of a 16-year-old boy and a 12-year-old girl in Brunete, near Madrid.

“I really don’t think this has been a traumatic experience for children. Those I know have been in a safe environment with their parents.”

She says her son, Mateo, is not particularly annoyed that his sister, Isabel, now has more freedom of movement than he does. But Susana is puzzled by the new norm.

“It’s a bit strange to put a barrier up between the over-13s and other children,” she says.

Miguel Sánchez’s mother is worried how the lockdown will affect him if it extends beyond the spring. As Spain’s thousands of summer fiestas and festivals start to be cancelled or postponed, Cristina Carrasco says this has started to worry him.

“In the short term he’s quite happy about the fact he doesn’t have to go to classes at school,” she says.

“But he says if this continues until 21 June, when the school holidays begin, nobody is going to stop him from going out.”