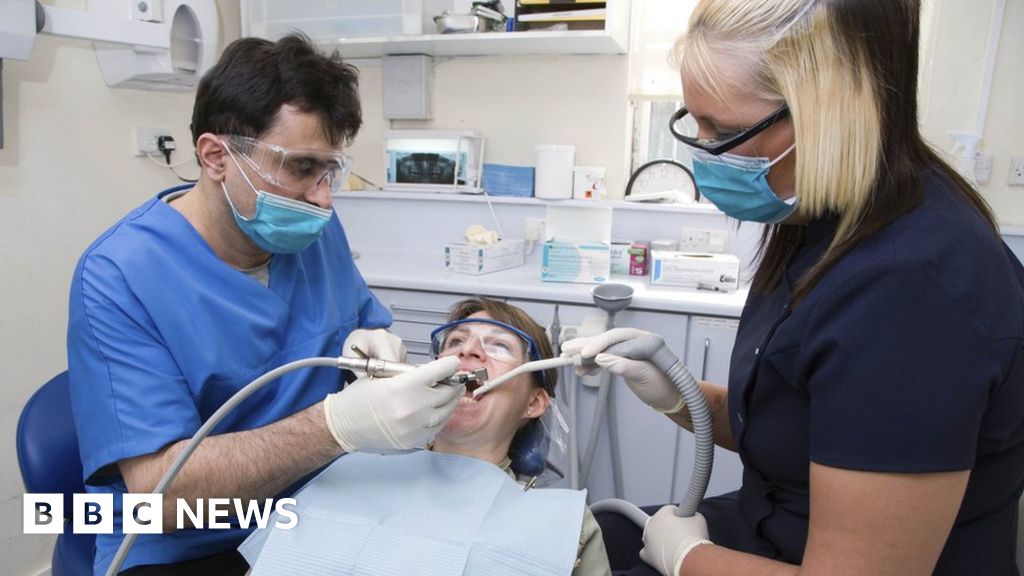 Dentists in England are facing “critical shortages” in personal protective equipment (PPE), forcing patients with urgent problems to “take matters into their own hands”, says an organisation representing UK dentists.

Over half (54%) of dentists in England say that PPE shortages are hampering efforts to treat patients at urgent dental care (UDC) hubs, according to a survey carried out by the British Dental Association (BDA).

The BDA, which surveyed one thousand dentists, says a lack of PPE has meant some UDC hubs can’t currently treat patients. It says a third of the sites in England remain inactive, compared with just 2% across Scotland, Wales and Northern Ireland.

In response, the chief dental officer for England, Sara Hurley, says there are now 219 open hubs “to provide care for those who need it” and that “every hub has the relevant PPE and work is ongoing to ensure that supply is maintained.”

What are urgent dental care hubs?

UDC hubs are designed to provide emergency dental treatment for patients with urgent needs, such as cracked teeth, gum infections and facial swelling. Patients requiring emergency treatment are meant to be referred to a UDC hub after a telephone consultation with their local dentist.

Local practices were told to suspend routine face-to-face services on 25 March in order to slow the spread of coronavirus and to set up local UDC hubs to treat patients with urgent needs.

However, BDA Chair Mick Armstrong says progress has been too slow.

“Many dentists have been redeployed, only to find their hands tied by a critical shortage of kit, and delays in training and fit-testing. The depth of these problems will fatally undermine any progress on getting this network up and running,” he says.

One dentist, who wanted to remain anonymous, told the BBC they had been redeployed to a UDC hub in the Midlands. However, they said their hub is currently unable to treat patients until a testing kit to be used on masks arrives.

“It’s frustrating and disappointing when we know there is a significant need for urgent care because of a lack of training and PPE”, they said.

“The testing kits are shared across the region and they’re being been taken up and down the motorway, and we’re still waiting for it to arrive.”

“But as soon as we get the PPE, the hub will be up and running”.

Another dentist, based in the south, said that while their hub was treating patients, they only had about 20 days’ worth of FFP3 masks remaining. The FFP3 mask offers one of the highest grades of protection.

The dentist said they would have to stop treating patients if they ran out of masks and replacement ones could not be sourced.

The BDA’s survey found that two thirds of dentists at sites in England are reporting shortages of FFP3 masks and gowns and that 58% of dentists say they do not feel fully protected at their sites.

Dentists say PPE is necessary because they can be as close as 20cm from patients’ mouths and are therefore at a high risk of contracting and spreading Covid-19.

Dr Michael Ehrlich is a dentist based at a practice in Brighouse, West Yorkshire. He says he’s been giving advice to patients over for the phone for the past three weeks.

“A broken tooth, a sharp bit of tooth, a lost crown, they are not urgent but they still cause discomfort. And then there are certain things that really need seeing and sorting out, but at the moment we have nowhere to send people”, he says.

“It just had to come out”

Aircraft fitter Billy Taylor, 33, from Axminster, Devon, told the BBC that he decided to pull out his own tooth after experiencing “pretty bad” pain over the Easter bank holiday weekend.

“I phoned my dentist. They said they’re closed and will put me on an emergency waiting list, but they’re not sure how long it would take to see me”, Mr Taylor said.

Mr Taylor said the DIY extraction took an hour and a half.

“I didn’t release how hard it would be to take out a molar tooth”.

Kathryn Hey, 47, a teacher from Biddulph in Staffordshire woke up with a sudden sharp pain on 2 April. She says she has not been seen by a dentist, despite making two phone calls and is managing with painkillers

“My tooth ache is more manageable now so I’m waiting for the lockdown to end before contacting my dentist again”, she says.

“However, I still can’t eat or drink on the side my tooth is, so it affects me every day.”

What happens if you need to see a dentist?

In the first instance, patients are advised to call their local practice.

If symptoms are serious, local dentists can prescribe medication over the phone (such as painkillers and antibiotics). In such cases, dentists can contact local pharmacies, which can then prepare medication for patients to pick up.

If a patient has an urgent dental problem, then they should be referred to a UDC hub. Other emergency treatment may also be available. For example, some hospitals may offer emergency dental walk-ins.

However, if a patient cannot reach their local dentist – or is not registered with one – then the advice is to use the 111 online service.