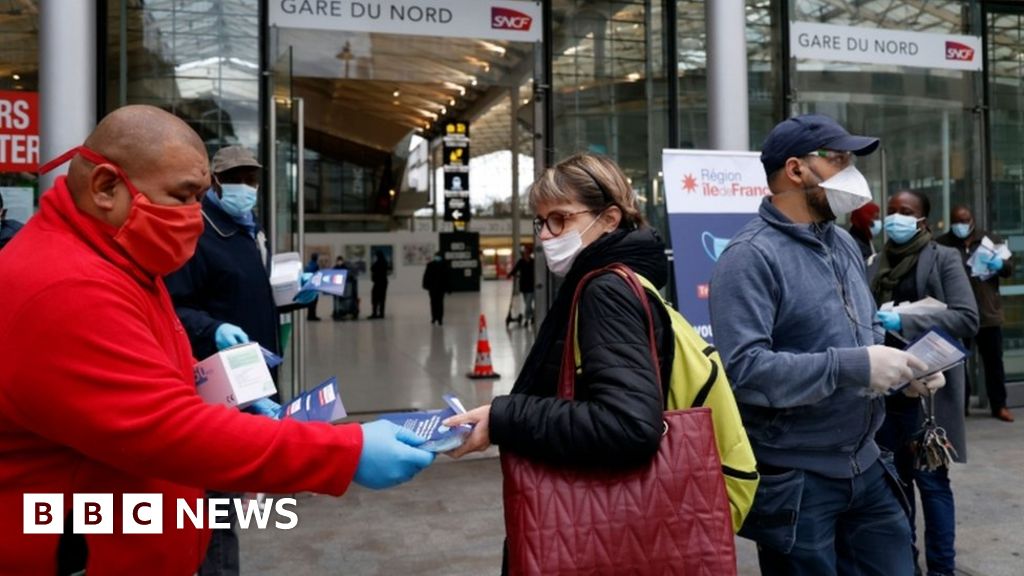 Half a million masks were being handed out on Wednesday in stations around Paris, with France set to ease public transport restrictions next month.

But although Europe’s leaders want to kickstart economies hit by the Covid-19 pandemic, how to resume movement of people remains a difficult issue.

Unions expressed fears at the French plans to let people move freely with a mask from 11 May on trips up to 100km.

And Germany extended a warning against global travel until 14 June.

That means no decision has yet been taken on families taking their children on summer holidays.

In common with several other EU states, Germany closed some of its land borders last month to try to curb the spread of coronavirus and repatriated 240,000 German travellers from abroad.

EU governments are having to decide how to resume public movement both within their countries as well as beyond.

Airlines have been severely hit by the grounding of planes and 12 EU states have called for travel rules to be changed so that airlines can compensate passengers with vouchers rather than cash for cancelled flights.

Neighbouring countries are also trying to handle cross-border workers. Germany has relaxed a quarantine on Polish commuters but Poland has not yet followed suit. Hundreds of people staged protests in Polish border towns last week.

What is France doing?

Prime Minister Edouard Philippe said there would be no unrestricted travel from 11 May but France would be divided into red zones, where Covid-19 was still circulating, and green zones where it was less of a risk.

There would have to be social distancing on the metro in Paris and services would be ramped up from 30% capacity now to 70% after 11 May. Train operator SNCF has urged employers to continue home-working and offer flexible shifts to prevent a surge in the rush-hour.

In France, you currently need to print out a document before you leave the house. That will only be necessary after 11 May if the journey is more than 100km (62 miles), which will be allowed “solely for compelling family or professional reasons”.

Outside the EU, Serbia plans to restart public transport next week but the transport workers’ union in the capital Belgrade has warned that there are not enough drivers or vehicles to ensure social distancing of passengers.

Is anyone opening up beaches?

Several European countries are still hoping to reopen their beaches in time for the summer tourist season.

France has said no beaches will be open until at least June and Spanish Prime Minister Pedro Sánchez says reopening beaches at the end of June is part of his government’s four-phase plan to return to a “new normal”.

Travel from one part of Spain to another will also be restricted until June.

In Belgium, mayors from towns along the North Sea coast have agreed to reach a decision by 8 May on how to restrict beach access and “save the summer of the Belgians”.

Croatian Tourism Minister Gari Cappelli has called for “tourist corridors” to be created between separate EU countries, with epidemiologists deciding the necessary rules for movement.

Much of Southern Europe relies on tourism for a considerable part of its economic output and there have been reports that Czech tourists could be allowed into Croatia in July and August.