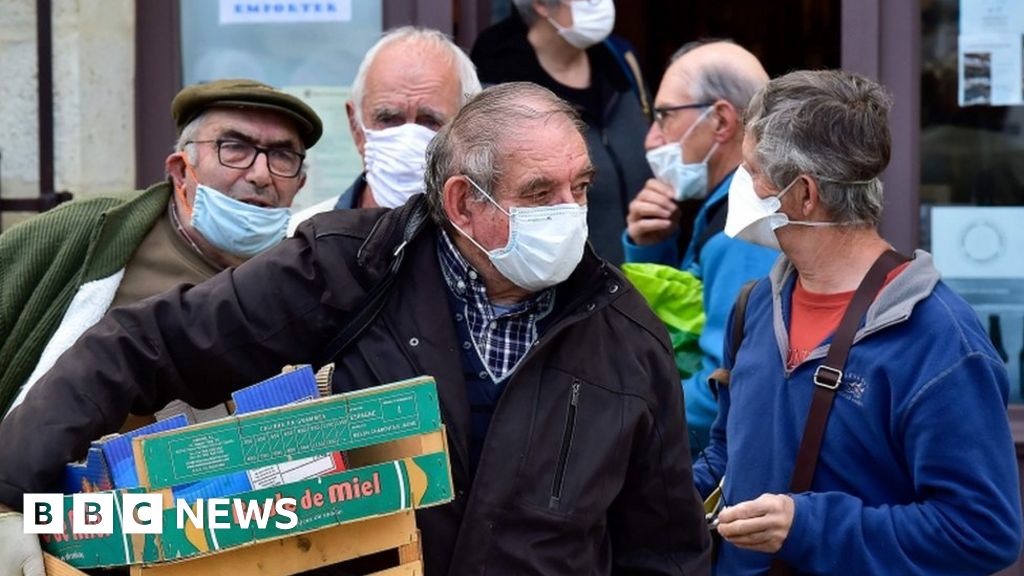 France will make face masks compulsory on public transport and in secondary schools when it starts easing its coronavirus lockdown on 11 May, Prime Minister Edouard Philippe has said.

Schools will reopen gradually, starting with kindergartens and primary schools.

Pupils aged 11-15 will be expected to wear face masks.

It comes as hard-hit Spain also outlined its lockdown exit plan, aiming for what its prime minister called “a new normality” by the end of June.

How will France reopen?

Non-essential shops and markets will open their doors again from 11 May, but not bars and restaurants.

Stores will have the right to ask shoppers to wear masks, and should ensure they remain a metre (3ft) apart, the prime minister said.

In a relief to many, the French will be able to go outside again without a certificate confirming their intentions, and public gatherings of up to 10 people will be allowed. Crèches will also reopen – but with a maximum of 10 children in each group.

France has suffered one of the highest Covid-19 death rates in Europe, along with the UK, Italy and Spain.

On Tuesday the number of people who have died with the virus rose by 367 to 23,660, the country’s health ministry said. Some 129,859 people have been infected.

Hospital admissions and the number of patients in intensive care have been falling, however, giving cause for cautious optimism.

Addressing parliament, Mr Philippe said the lockdown had saved an estimated 62,000 lives in France in a month, but that it was time to ease measures to avoid an economic collapse.

“We will have to learn to live with the virus,” he said, until a vaccine or effective treatment is available.

He summed up France’s priorities as “protect, test, isolate”.

Parliament was scheduled to vote on the government’s proposed measures after a debate. Only 75 of almost 600 French MPs were allowed into the chamber for reasons of social distancing, with others voting by proxy.

Will the lockdown definitely be lifted?

“The risk of a second wave, which would strike a weakened hospital fabric, which would impose a ‘re-confinement’, which would ruin the efforts and sacrifices made during these eight weeks, is a serious risk,” he said.

France has seen about 2,162 new cases a day on average over the past two weeks.

The government has set a target to carry out at least 700,000 coronavirus tests per week from 11 May, the prime minister said, and will cover the cost of testing.

“Once a person has tested positive, we will begin to identify and test all those, symptomatic or not, who have had close contact with them. All these contact cases will be tested and will be asked to isolate themselves,” he said.

Mr Philippe said that where possible, people should keep working from home beyond 11 May.

French central planning is at its finest in a crisis

As the prime minister said, never in history – not in war, occupation or disease – has France had to confront such massive disruption. And now from the best fonctionnaire brains in the land comes an exit strategy that might just measure up to the disaster.

As ever in hyper-rational France, the plan is built round numbers, categories and systems.

The key figure is 3,000. That is what the government reckons will be the number of daily infections in the weeks ahead. By setting up local “brigades” of investigators to track the trail of infection, they reckon they will test 20 contacts per infection – so 420,000 tests a week, which is well within planned capacity.

Those found to have the virus will be expected to self-isolate, either at home with their families or in requisitioned hotels. And as for the rest of the population, life will very gradually resume.

Protection, testing, isolation. That is the system. Which is itself then conditioned by three imperatives: acceptance of the enduring nature of the virus, progressive implementation, and regional adaptation.

It always sounds a mouthful when a French technocrat expounds on a plan. But sometimes it may be exactly what the country needs.

Who will have to wear masks?

Addressing the shortage of masks in France, Mr Philippe said they would be widely available by 11 May. He called on all companies to provide staff with masks, and said the government would help small firms if necessary.

Masks will also be sold on the website of the French post office, and five million washable masks will be set aside each week for the most vulnerable.

From 11 May everyone using public transport, including trams, trains or the metro, will have to wear a face mask.

It comes after Germany made wearing cloth masks compulsory on public transport, and in shops in some regions.

In schools, France’s kindergarteners will not be expected to wear masks unless they start showing symptoms during the school day. Middle school children (aged 11-15) will be expected to, however, and the government will make masks available for students who can’t access them.

Classes will be no larger than 15 students, the prime minister said.

Elementary schools will begin opening from 11 May. Middle schools in districts with milder outbreaks may be allowed to reopen from 18 May, and high schools at the end of the month.

What will remain closed?

The prime minister noted that some parts of the country had suffered worse outbreaks than others, and said mayors and local authorities would be allowed to adapt the government’s strategy to their locality.

The framework to decide which areas need a stricter form of lockdown easing will be fixed on 7 May, he said.

Some areas will be categorised as “green” and others as “red”, depending on their tally of new cases, testing capacity, and the pressure on local hospitals.

Nationwide restrictions that will remain in place include: