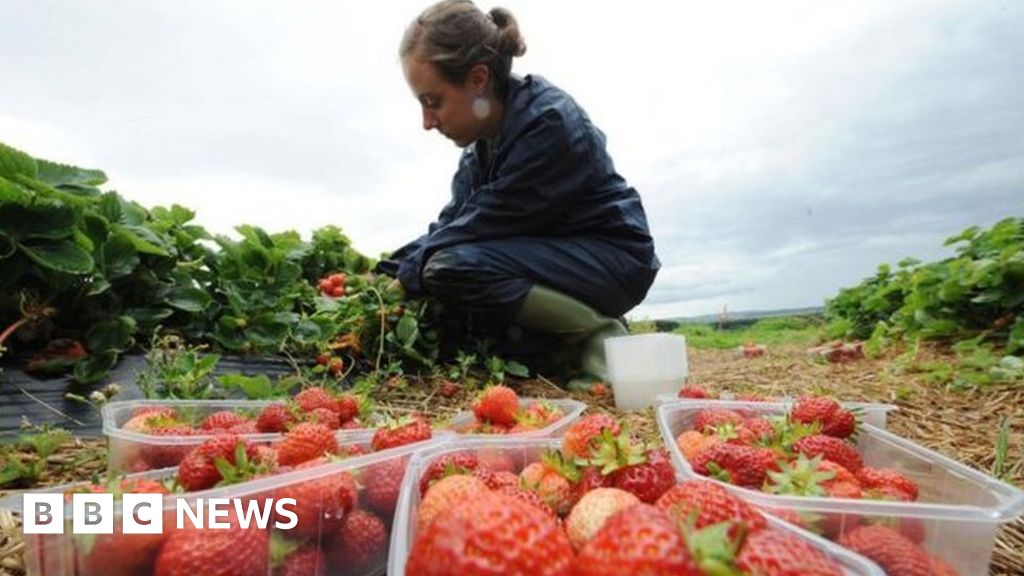 Furloughed workers may be encouraged to work as fruit and vegetable pickers to help farmers fill a labour shortage, the environment secretary has said.

George Eustice told the daily Number 10 coronavirus briefing that only a third of the usual workforce was available.

Many more would be needed in the summer and “we are working with industry to identify an approach” to get furloughed employees to help, he said.

Much of the work would normally be done by seasonal migrant labourers.

According to the British Growers Association, 70,000 seasonal staff a year are needed.

However farmers say the pandemic has restricted the availability of foreign workers and have complained they cannot recruit enough domestic labour.

Earlier this month special charter flights were arranged to fly in workers from Romania.

Mr Eustice did not spell out how furloughed workers would be recruited.

He said the international food chain is continuing to work well, but added the government was “acutely aware” that the British season for soft fruits and salads was about to begin.

Mr Eustice estimated only about a third of the migrant labourers who normally work in the UK are in the country – and they arrived before lockdown.

“We are working with industry to identify an approach that will encourage those millions of furloughed workers in some cases to consider taking a second job, helping get the harvest in in June.”

He added: “It’s not an issue at the moment since the harvest has barely begun, but we do anticipate that there will be a need to recruit staff for those sectors in the month of June.”

Shadow Environment Secretary Luke Pollard said the government needed to explain what support it could offer those working in the food supply sector, in particular farmers who are worried about their crops rotting in fields due to lack of agricultural labour.

Furloughed staff have the right to seek work elsewhere during the shutdown as long as they have the permission of their main employer and are able to complete any training required of them while stood down.

Mr Eustice also told the briefing that food availability is improving, with both staffing levels in supermarkets and online delivery slots increasingly.

Many food retail staff who had been self-isolating through suspected coronavirus have returned to work, he said. “Absence levels are down from a peak of typically 20% in food businesses three weeks ago, to less than 10% at the end of last week, and, in some cases, individual companies reporting absences as low as 6%.”

And UK supermarkets are adding an extra 300,000 delivery slots, following complaints, especially from vulnerable shoppers, that they were unable to book online slots.

There were 2.1 million delivery slots at the beginning of the Covid-19 lockdown, a figure that increased to 2.6 million as demand soared.

Mr Eustice confirmed it is now increasing to 2.9 million, although he admitted this may still not be enough to meet demand.