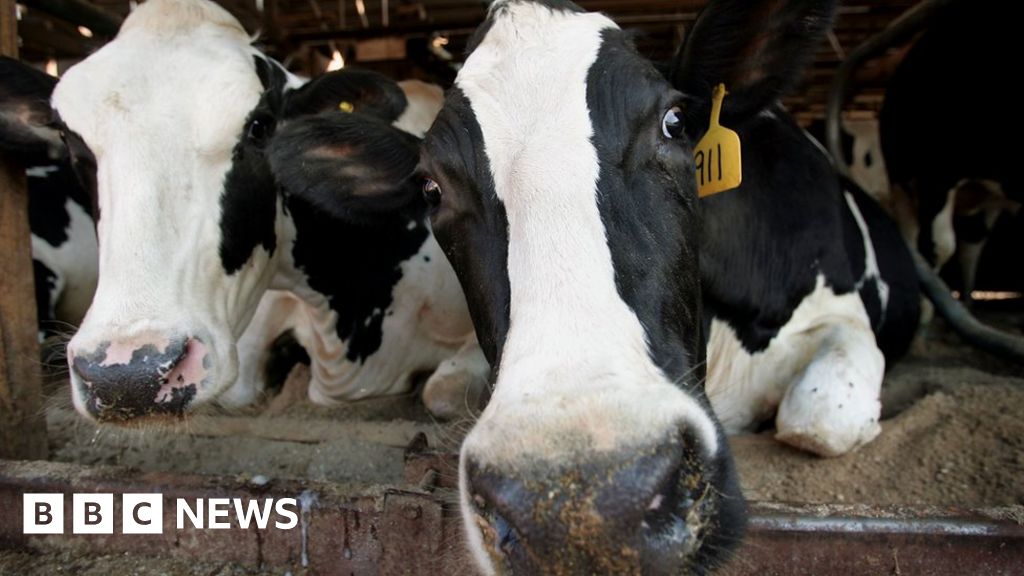 The government is understood to be considering a hardship payment for dairy farmers after warnings tens of thousands of cows could be slaughtered.

Demand for dairy products in the hospitality sector has dropped with the closure of many cafes and restaurants.

George Eustice will discuss the issue with senior Tories, while talks with MPs and trade reps are due on Tuesday.

The Department for Environment, Food and Rural Affairs said it had relaxed competition law to help the industry.

The coronavirus outbreak has led to problems for the dairy industry, with some farmers forced to discard milk.

It is thought a hardship fund could take the form of a targeted time-limited payment for badly affected farmers.

The former environment secretary, Owen Paterson, said: “There is an urgent need for some form of rapid hardship fund for the minority of dairy farmers, who temporarily have no market for their milk, to avoid seeing cows slaughtered.”

“I don’t want to see tens of thousands of cows slaughtered unnecessarily due to coronavirus,” he said.

The chair of the Welsh Affairs select committee, Stephen Crabb, said he understood why Defra wanted to take time to assess the problem but “the time for action has come”.

“Some kind of hardship payment does need to be made available for the farmers most affected.”

He added: “The issue of slaughter has been raised by local farmers. It doesn’t appear that it’s likely to happen tomorrow but could, if the right action isn’t taken, be a longer term consequence.”

Chris Loder, the Conservative MP for West Dorset, said: “The government must act urgently to provide a hardship fund to support dairy farmers in desperate need to avoid any culling of the national herd.”

The National Farmers Union, Dairy UK and the Provision Trade Federation have proposed action including targeted grant support and a scheme whereby some cows would effectively be “furloughed”.

It’s understood that, during recent conference calls, industry members have raised a “doomsday scenario” of 80,000 cows being culled – out of a national herd of nearly two million.

However, that figure has been downplayed by some including Sir Geoffrey Clifton-Brown, who described such a number as “highly unlikely”.

The plunge in demand from the hospitality sector comes as UK milk production approaches its annual seasonal peak.

Phil Langslow, chair of the Provision Trade Federation, described the situation as a “perfect storm”.

Mr Langslow, who’s also a director at County Milk Products, estimates that 20m litres of liquid milk a week would normally have been going into the food service with only around 20% of that market still viable during the current lockdown.

In a letter to MPs last week Mr Eustice said: “Between 5% and 10% of total milk production goes to the food service trade and there is therefore a small proportion of milk production that currently has no home.

“The vast majority of Britain’s 10,000 dairy farmers continue to supply their contracts at the usual price.”

But Mr Eustice’s letter has attracted criticism from some industry figures.

He claimed that the government had “vastly underplayed” the problem.

A Defra spokesperson said the government was working closely with the NFU, Dairy UK and other stakeholders.

“We have already relaxed competition laws to allow the dairy industry to reroute surplus milk and adapt to changes in the supply chain.

“We also welcome the initiative from milk suppliers and their farmers to temporarily reduce the amounts they are producing, through a range of options, so that when the demand returns it can be met by our dairy farmers.

“We will continue to work with the industry to understand the potential impacts on farmers and also urge them to access the existing package of government financial support available.”