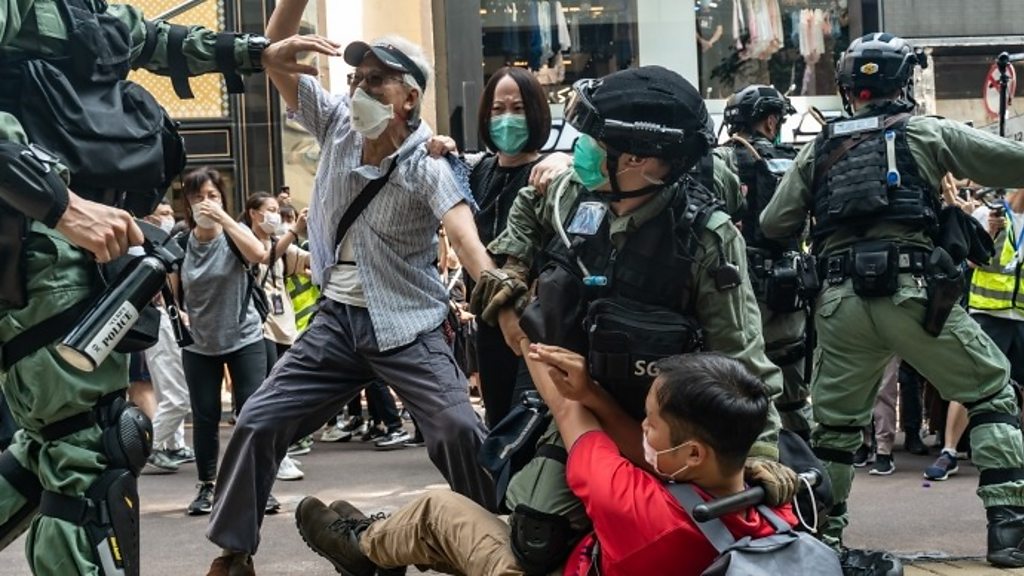 US Secretary of State Mike Pompeo has certified to Congress that Hong Kong no longer merits special treatment under US law.

The declaration could have far-reaching implications for US-Hong Kong trade.

“No reasonable person can assert today that Hong Kong maintains a high degree of autonomy from China, given facts on the ground,” he said in a statement.

It comes hours before Beijing is expected to impose a controversial new security law on the territory.

The security law was “only the latest in a series of actions that fundamentally undermine Hong Kong’s autonomy and freedoms,” Mr Pompeo said.

“It is now clear that China is modelling Hong Kong after itself,” he added.

What is the significance of Pompeo’s statement?

Until now the US has given Hong Kong – a global financial and trading hub – special status under US law. The provision dates from when the territory was a British colony and gives it favourable trading terms.

But since last year this status has been conditional on the US secretary of state regularly certifying that Hong Kong maintains sufficient autonomy from mainland China.

If the secretary of state fails to certify this, the US Congress can revoke Hong Kong’s special trade status.

This would mean treating Hong Kong the same as mainland China for trade and other purposes.

Today, I reported to Congress that Hong Kong is no longer autonomous from China, given facts on the ground. The United States stands with the people of Hong Kong.

What impact would revoking status have?

It could jeopardise billions of dollars worth of trade between Hong Kong and the US and could dissuade people from investing there in the future.

It would also hurt mainland China, which uses Hong Kong as a kind of middleman for transactions with the rest of the world. Mainland companies and multinational firms use the territory as an international or regional base.

Additionally, the Hong Kong Human Rights and Democracy Act, passed by the US last year, enables sanctions against officials responsible for human rights violations in Hong Kong. The sanctions include visa bans and asset freezes.

Beijing’s security law would create “massive damage to expats and investors in Hong Kong”, he said, and maintaining autonomy was the “only way” to protect business.

What is Beijing’s security law about?

Beijing has proposed imposing it in Hong Kong.

It would ban treason, secession, sedition and subversion and China says it is needed to combat violent protests that have grown in the territory.

The anti-mainland sentiment was fuelled last year by a proposed – and later scrapped – bill that would have allowed criminal suspects to be extradited to China.

Critics say the security law is a direct attempt to curtail the freedoms given Hong Kong in the mini-constitution that was agreed when sovereignty was handed back to China in 1997.

Hong Kong’s Chief Executive Carrie Lam has denied that the law, which is set to go to a vote this week and could be in force as early as the end of June, will curtail the rights of Hong Kong residents.

A group of 200 senior politicians from around the world have issued a joint statement criticising China’s plan.

On Tuesday, President Donald Trump said the US would announce a “very powerful” response to the proposed legislation before the end of the week. China’s plans had already been condemned by Secretary of State Mike Pompeo, who described them as a “death knell” for the city’s freedoms.

The UK, Australia and Canada have also expressed their “deep concern”.