‘I feel like I don’t count,’ says man with MND 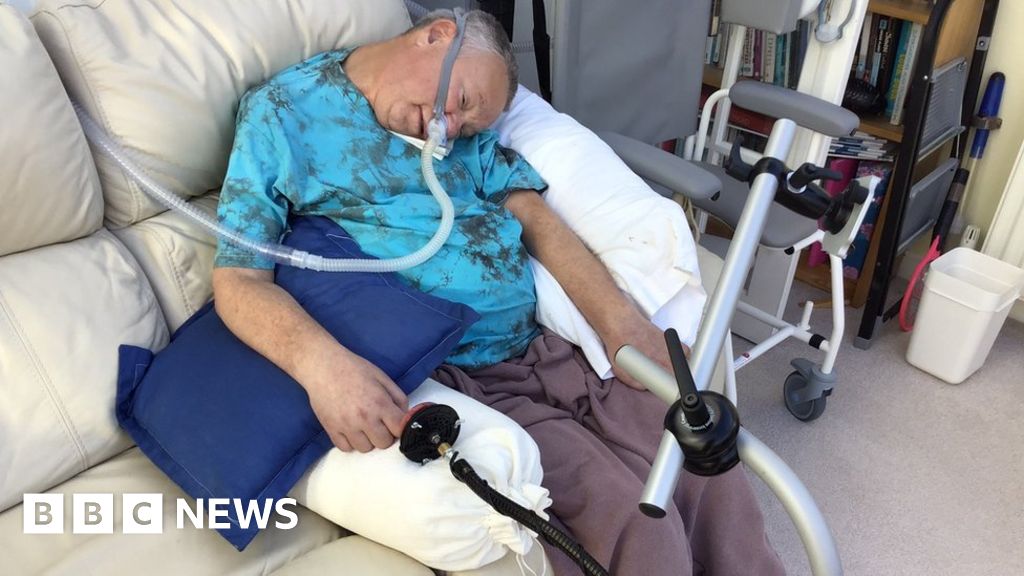 Phil Rossall, a 67-year-old retired teacher and charity worker from Kent, was first diagnosed with motor neurone disease (MND) in 2016.

At the time, doctors told him he had just “one or two” years left to live.

Four years have passed since his diagnosis, and he is now unable to move his limbs or breathe without a ventilator.

But he has refused to let the disease break his spirit, and last year managed to smash two Guinness World Records for running marathons in his wheelchair.

Phil says that it has become difficult to keep track of how far his disease has progressed: “I don’t notice day-to-day changes, but then looking back to the start of this year is a scary experience for me,” he told the BBC.

MND is a degenerative and often fast-progressing disease. Due to its nature, those with the condition have a heightened risk of complications if they catch a respiratory infection like Covid-19.

Phil and his partner, Brenda, have been self-isolating for the last month.

“The enforced isolation has meant that my blog and book have been the main respite from a world of hoists, wheelchairs and face masks,” he said.

“My speech is now completely incomprehensible, so writing is now my only form of communication with the outside world. I miss my St Christopher’s carers and the MND Association visitors, but my heart goes out to people who are desperately ill and who feel deserted by their own government.”

Despite relying on a ventilator to breathe, Phil was not initially included in the government’s list of who should be shielding. He says that the government’s advice since the coronavirus outbreak began has felt like a succession of “mixed messages” that left him and his partner unsure of his situation.

“I have two postgraduate degrees and have worked as a research manager, and yet I have been very confused,” he said. “Seeing that I have a debilitating condition and that I am reliant on ventilation 24/7, I was expecting to be included, but instead I was not in the 1.5 million most vulnerable in the country. All I can say is that there must be an awful lot of very sick people out there.”

While the disease is on the NHS England list of underlying health conditions, it has yet to be explicitly named on the list of those who should be “shielding”.

The advice on whether MND patients should be on the shielding list has said it depends on the stage of their illness.

The MND Association, a charity dedicated to the care and protection of those living with the disease, told the BBC it had been inundated with concerned and upset patients and families.

“Many are terrified of catching coronavirus, knowing the implications for them could be catastrophic,” said head of policy and campaigns, Susie Rabin.

She said more than 3,500 of the charity’s supporters had emailed their MPs urging them to ask Health Secretary Matt Hancock to add MND to the “extremely vulnerable” list.

“Not being automatically added to the extremely clinically vulnerable shielding and protecting list, means that people are struggling to get food and essential medicines delivered, particularly if they live alone.

“We believe that inclusion on the ‘extremely vulnerable’ list is the safest and most appropriate option for people with MND.

“There needs to be more support for social care workers and much more adequate provision of PPE for carers both in care homes and in domestic settings to enable them to support and care for disabled people.”

As his primary carer, Phil’s partner is unable to leave him alone in the house. Because of this, the couple have come to rely on a delivery service from their local supermarket over the last three years.

However, due to not being classed as “extremely vulnerable” by the government, the couple were told that they were not eligible for a delivery slot.

“The fact remains that I was receiving a vital service until the ‘extremely vulnerable’ rules came in. Whether the omission of MND from the official shielding list was a result of incompetence, ignorance or prejudice, doesn’t matter to me.

“I will not go hungry. But for the first time in my life, I feel I am a victim of discrimination. I never get angry. I may be wrong, but I feel like I don’t count, that I belong to a group that’s not worth bothering about because we’ll be dead soon anyway.”

He felt forced to take matters into his own hands, and only after he had asked his consultant to send a supporting letter to his GP, did he finally receive the phone call to tell him he had been placed on the list.

A spokesman for the Department of Health and Social Care told the BBC that patients with MND are being assessed on an individual basis.

“The list will continue to be reviewed, and doctors are identifying additional people who need to shield depending on their individual circumstances.”

Those who are not classified as “extremely vulnerable”, but have underlying health conditions, are still advised to adhere to stay-at-home guidelines, he added.

Despite his victory, Phil says he’s concerned that others like him may not be so lucky.

“I am still concerned that other people with this terrible disease do not have the support I have.”

He added: “I am still angry that the government advisers forgot some of the most vulnerable people in the country and ignored our pleas for so long. Surely it shouldn’t be so hard.”