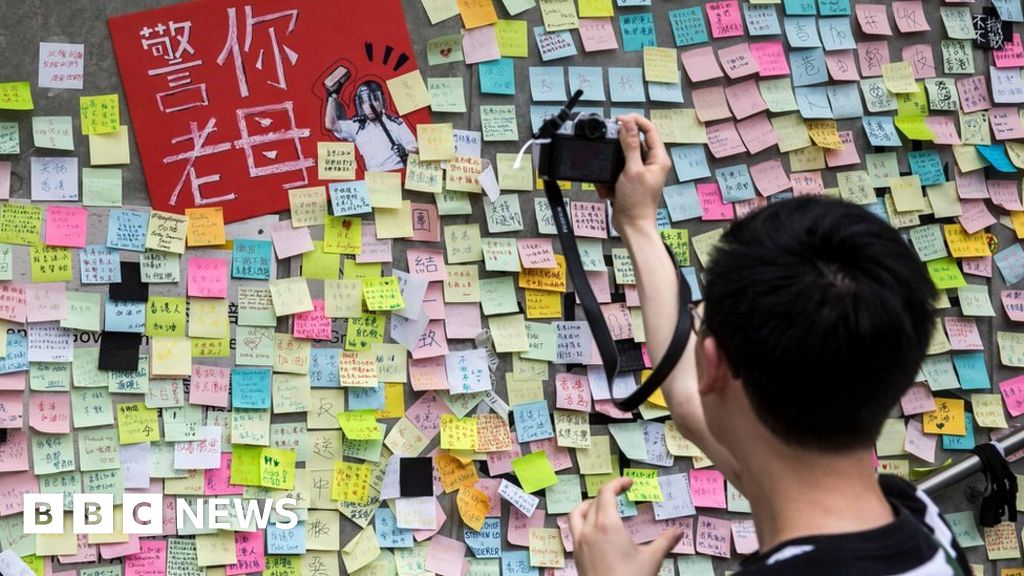 The judge compared the protesters to an army that had brought fundamental change to Hong Kong.

Judge Kwok Wai-kin said the defendant was himself a “victim” of the anti-government unrest.

The three victims needed hospital treatment, and one of them was critically wounded.

Tony Hung Chun attacked a newspaper reporter and two others with a meat cleaver at a pro-democracy “Lennon Wall” of stickers and posters in the Tseung Kwan O area of Hong Kong after a discussion over current affairs, the South China Morning Post (SCMP) reports.

The discussion, inside a pedestrian tunnel used by protesters to leave messages of support for each other, became heated in August last year.

Hung had felt angry when he passed the wall and saw people putting up posters, as he had been out of work for about two months and believed these were the people who had caused the economic downturn, the website reports.

His lawyer told the judge his income as a tour guide had been badly affected by the protest movement, Radio Television Hong Kong reports.

Judge Kwok Wai-kin agreed during sentencing on Friday that the anti-government protesters had been “like an army”, beating people up and blocking roads.

He said protesters who hurt ordinary people while pursuing their cause were no different from terrorists, according to local media reports.

Their extremist conduct was reminiscent of that seen during the Cultural Revolution, the judge is quoted as saying.

The Cultural Revolution, a campaign launched by then-leader Mao Zedong to get rid of his rivals, led to massive social, economic and political upheaval in China. Millions are thought to have died.

Hung pleaded guilty in December to three counts of wounding with intent, and apologised to his victims and the people of Hong Kong.

The judge described Hung as “an involuntary sacrifice and a bloodstained victim hanging by his last breath” as the protesters had “ruthlessly trampled on his right to work, live and survive”, according to the SCMP.

Lennon Walls plastered with colourful notes spread across Hong Kong during the protests. They got their name from a wall in Prague that was filled with John Lennon-inspired graffiti after the singer-songwriter’s death in 1980.

The territory saw weeks of protests over a proposal to allow suspects in the city to be extradited to mainland China.

While that was later abandoned, the protests morphed into demands for greater democracy and less control from Beijing, and anger against the government remains.

As a former British colony, Hong Kong is part of China but run under a “one country, two systems” arrangement that guarantees it a high level of autonomy, except in foreign affairs and defence.