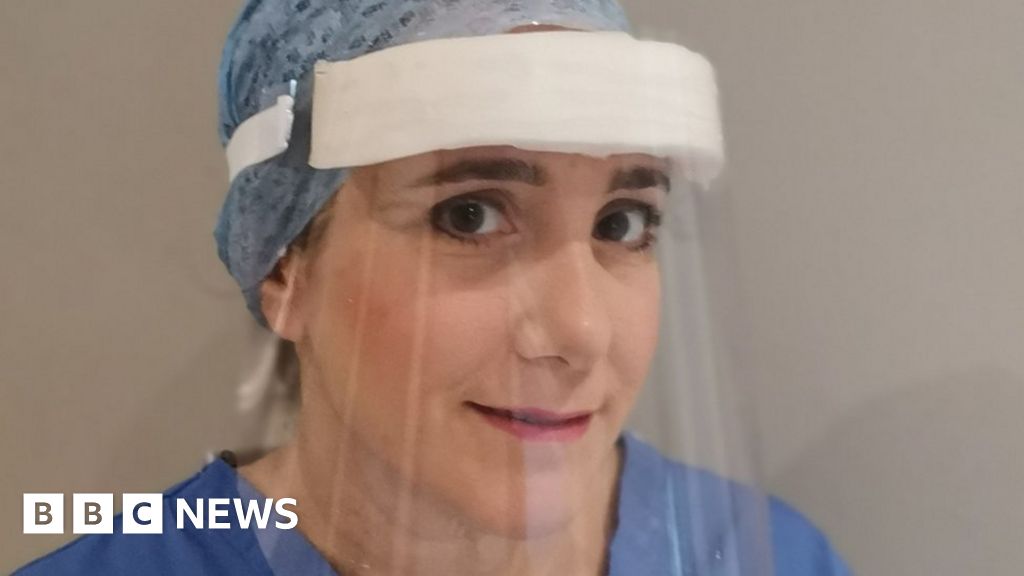 A doctor who urged volunteers to make visors for NHS staff due to a shortage at her hospital says she is “overwhelmed” by the response.

More than 75,000 face shields have been produced just weeks after Deborah Braham appealed for help on WhatsApp.

The Visor Army project spread on social media and has found support among high-profile TV and fashion celebrities.

It comes after a BBC investigation found the government failed to buy protective kit to cope with a pandemic.

Panorama revealed this week there were no gowns, visors, swabs or body bags in the government’s stockpile when Covid-19 reached the UK.

Some NHS staff say they are being put at risk because of the shortage of personal protective equipment (PPE).

The government said it has taken the right steps and is doing everything it can to increase stocks while the NHS trust which manages Hammersmith Hospital in west London, where Dr Braham is based, said it was grateful to community groups for their support.

Dr Braham, a consultant in anaesthesia and intensive care medicine, first put out a call to friends on WhatsApp with instructions that had been passed on to her on how to make visors.

“I just thought it would be something they could do with their kids, stuck at home, like an activity but helping at the same time,” she told the BBC.

To begin with, a handful of people got involved, buying their own materials from craft shops, making the visors at home and delivering them to Dr Braham’s house. Then, as word spread, the number of volunteers – and visors – grew.

A Facebook group – called Visor Army – Make A Visor. Save A Hero – was set up on 1 April to channel interest from members of the public.

“Initially it was just people I knew who came on board, then it was people I didn’t know,” Dr Braham said. “Within a short time this whole thing had grown so big with so many people wanting to help.

“It’s given a lot of people a real sense of purpose and contribution in what are very difficult times. It’s been a real community effort and I cannot thank these people enough.”

The visors are made from acetate, foam and elastic and the operation relies on donations to cover the cost of materials.

A GoFundMe page which was set up for the group has received the backing of the Rosetrees Trust, a charity which funds medical research.

The project has also picked up support from a number of celebrities, including TV presenter Jonathan Ross, Fred Sirieix of Channel 4’s First Dates, and The Apprentice star Claude Littner, as well as acclaimed hatmaker Philip Treacy.

“Philip Treacy was really keen,” Dr Braham said, “and when we had issues with the design he gave us advice, which was very helpful. After Philip, other milliners got on board, including the British Hat Guild.

“They should have been doing London Hat Week but instead they’re making visors.”

1/3. So after this weeks big clap here’s a brilliant way to help our #nhs. A local group are buying materials to make PPE visors. They then recruit volunteers to make them. We are part of the #visorarmy

The visors are stored at a facility where they are sanitised before being delivered to some 13 hospitals in London and south-east England, as well as doctors’ surgeries and care homes.

The importance of visors to medics lies in the fact that, unlike medical goggles, they provide protection for the whole of the face.

Without them, doctors and nurses are at high risk of being contaminated by aerosolised particles containing the virus during procedures such as intubation or when they are caring for patients on ventilators.

The lack of visors mean in some cases medics have been re-using rather than discarding them after single use, as is generally considered good practice.

Dr Braham is now trying to launch a similar drive to make much-needed medical gowns – a protective garment worn over scrubs – something she says is more expensive and would require many more volunteers. Suitable fabric is also in short supply.

The Visor Army project is one of a number of grassroots initiatives to make PPE which have sprung up since the coronavirus crisis erupted.

Schools and colleges have used 3D printers to make components for visors, while other community groups have been making visors, as well as sewing scrubs, or protective clothing worn by medics and health workers.

A spokesperson for Imperial College Healthcare NHS Trust, which manages the Hammersmith Hospital, said: ​”We currently have adequate supplies of all essential PPE equipment, including visors. Stocks of some equipment have got low from time to time.

“We are very grateful for all the support from our local communities at this unprecedented and challenging time.”