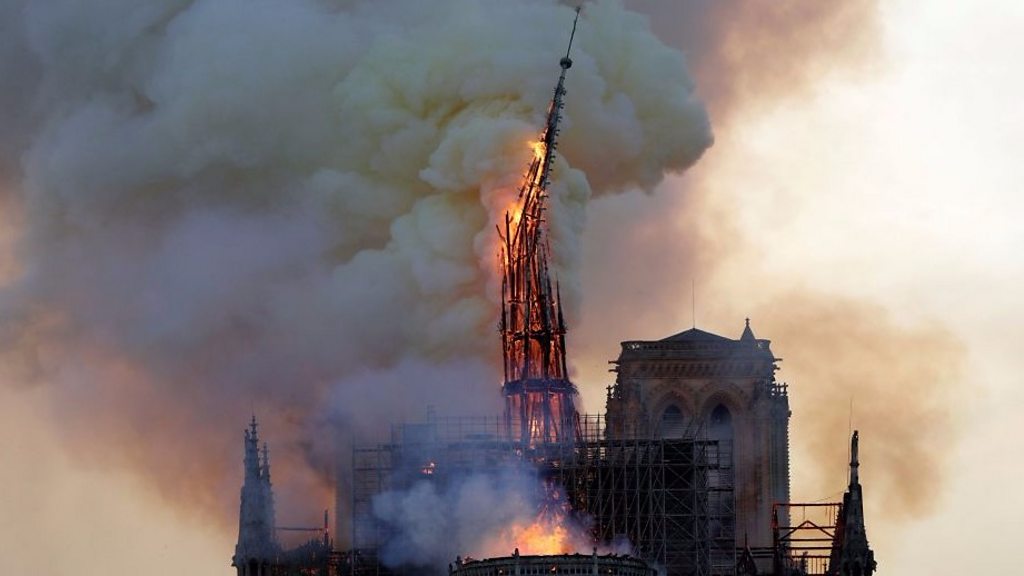 Repair work has restarted at Notre-Dame cathedral in Paris after halting during France’s coronavirus lockdown.

A fire tore through the iconic medieval building last April, destroying its roof and spire but leaving its structure intact.

The global coronavirus pandemic forced officials to delay the planned start of reconstruction on 23 March.

But on Monday, workers returned to the construction site to make it compliant with new social distancing rules.

A statement says face masks, hand gel and meals will all be provided. Nearby hotels will host those coming in to help on the building from outside the Paris area.

Authorities advised children and pregnant women in the area to take blood tests last June amid concern about lead contamination.

Monsignor Chauvet told Reuters news agency the first task for builders once work fully restarts in the coming weeks was to get rid of the metal scaffolding that melted onto the cathedral’s structure during the fire.

“When that’s removed, we can say that the phase of making safe will have been completed,” he reportedly said, adding that despite losing six weeks the restoration project was still on track to meet President Macron’s deadline.

It remains unclear what caused the Notre-Dame blaze.

Officials have ruled out criminal action, and have suggested an electrical fault or even a stubbed out cigarette as possible causes.

The country remains under lockdown, though has plans to ease the restrictions from 11 May. Prime Minister Édouard Philippe will address parliament on Tuesday before a vote on the plans.

Latest official data in France show almost 250,000 more people registered as jobless in March, when the lockdown measures were brought in.

In addition, more than 10 million private sector employees have been temporarily laid off because of the virus, with their salaries mainly paid for by the government.