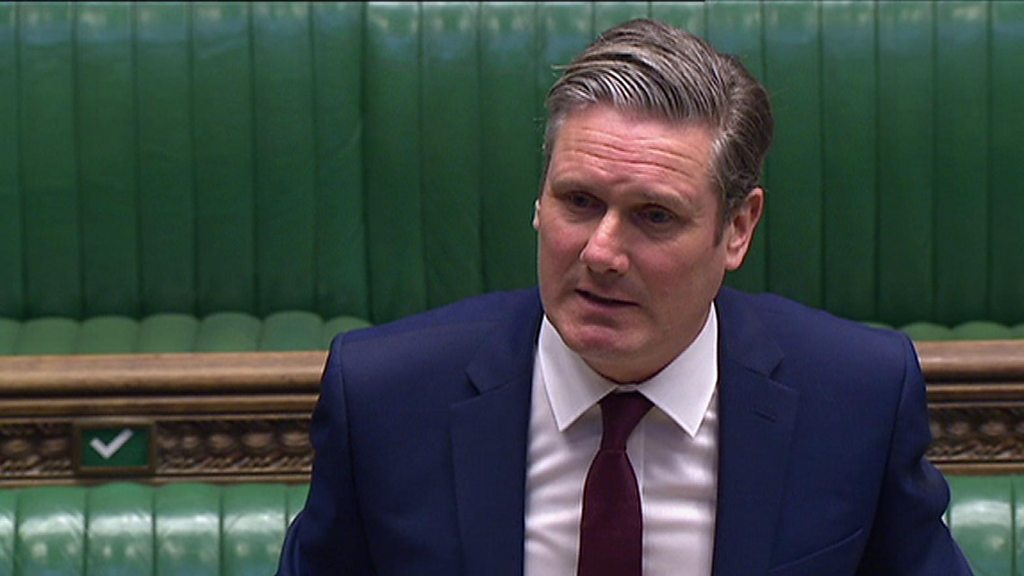 Coronavirus testing will increase more than five-fold over the next week, the government has promised.

The government has also revealed that 15 social care workers have died of coronavirus.

And new figures suggest coronavirus deaths in care homes in England could have doubled in five days.

It comes as the latest figures show 759 additional deaths in hospital across the UK, bringing the total to 18,100.

Mr Raab and Sir Keir were both present in the sparsely populated Commons chamber, with most MPs asking questions from home through video conferencing technology.

Downing Street said Boris Johnson, who is recovering from Covid-19, watched the proceedings from Chequers, the prime minister’s country estate.

Sir Keir, who was making his debut at the despatch box as Labour leader, said the UK has been “very slow and way behind other European countries” when it comes to coronavirus testing.

“All week we have heard from the front line, from care workers who are frankly desperate for tests,” he told Mr Raab, and asked why the government was not using all the tests that are available.

Mr Raab, who was standing in for Prime Minister Boris Johnson, said the government had testing capacity of 40,000 a day.

Based on that, and the fact that new laboratories were coming on stream, the government would meet its testing target, although it would need a “big increase” in the next week, he told MPs.

“I’ve set the goal of 100,000 tests a day by the end of this month and I’m delighted to say that the expansion of capacity is ahead of plans, even though demand has, thus far, been lower than expected.

“We are therefore ramping up the availability of this testing and expanding who is eligible for testing, and making it easier to access the tests.”

Sir Keir said the government had been “slow” at responding to companies that had offered to supply Personal Protective Equipment (PPE) for the health service.

And he said many care workers were not able to get to testing centres because they were miles away and unable to use public transport because of social distancing.

“It is little wonder we are seeing these pictures of half-empty testing centres,” added the Labour leader.

Mr Raab acknowledged there were challenges, but added: “The key point is, it is important to have a target and drive towards a target.”

On PPE, Mr Raab said the NHS had “high standards” and other countries, with weaker standards, had in some cases had to recall equipment.

In a statement following PMQs, Health Secretary Matt Hancock told MPs “we are at the peak” of the outbreak but added there could be no relaxation of the lockdown until the government could be sure of avoiding a second wave of cases.

He added: “We are ramping up our testing capacity and our capacity for contact-tracing in a matter of weeks, and we’ll have it ready to make sure that we can use that as and when the incidence of transmission comes down.”

He said the goal was to reach a point where “we can test, track and trace everybody who needs it”, adding that testing capacity was currently ahead of the government’s plans.

An NHS app to help trace the contacts of people who have been infected is now in beta testing, the health secretary said. Along with greater testing and a fall in the rate of transmission, he said it would allow them to “control this virus” with fewer social distancing measures.

Mr Hancock praised MPs for being “united in our purpose and resolve”. “This may be akin to a war but it’s one where the whole of humanity is on the same side,” he said.

It comes as new figures showed the number of people recorded as having died of Covid-19 in care homes in England could have doubled in five days.

Figures published by the Office for National Statistics on Tuesday went up to 10 April. They showed the deaths of 1,043 people recorded as being linked to Covid 19 in England and Wales – nearly 1,000 of those deaths were in English care homes.

The care regulator for England, the Care Quality Commission, working with the ONS, is analysing data from care home providers about coronavirus-related deaths and have looked at deaths between April 10 to 15.

In a statement, they say they anticipate the number of deaths recorded in care homes in England to be double the number reported on Tuesday.

They have not published the numbers yet, but this preliminary finding would suggest in a five-day period the deaths of nearly 1,000 people in care homes in England could have been linked to Covid-19, which if confirmed would bring the overall total to about 2,000.

They also say there may be a significant increase in non-Covid-19 related deaths – in line with what the ONS official statistics suggest.

The figures will be published on 28 April, once verified.

Care providers have always had to notify the CQC when a resident dies, but the forms have now been adjusted to collect information on whether a death is linked to coronavirus.

Criticising the government for heading towards “one of the worst death rates in Europe”, shadow health secretary Jonathan Ashworth called for care home deaths to be reported daily.

Mr Hancock said: “All deaths in care homes are of course recorded.” But he warned against comparing the different figures to make conclusions about the overall death toll, saying they were compiled on different time frames and needed “rigorous analysis” to ensure the comparison was accurate.

Have you been affected by the issues raised in this story? Share your experiences by emailing [email protected].