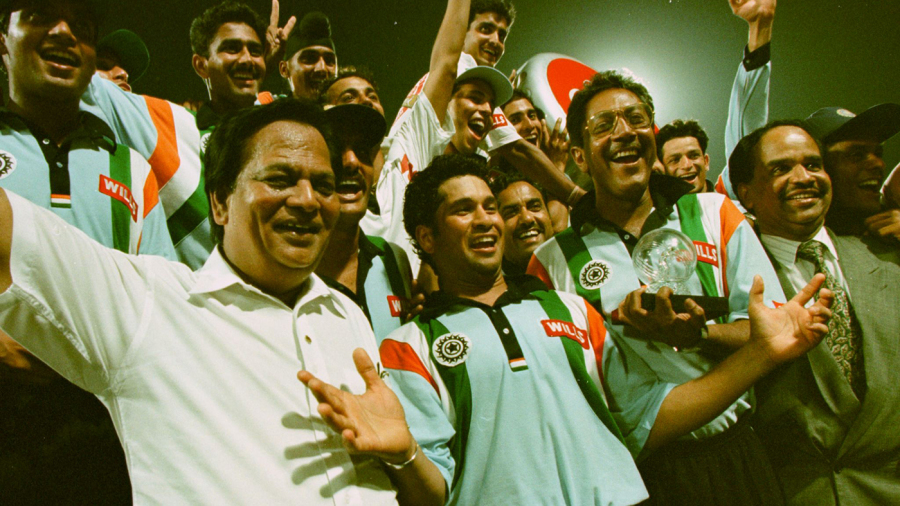 Is sport at its best when it throws up the unpredictable? Or does it reach its heights when a genius shows up and makes the improbable look utterly predictable? It would be the cheesiest of movie scripts: our hero bats out of his skin against the world’s best team to drag his struggling side into the final of a tournament where they meet the same opponents, and beat them thanks to another masterful effort from our hero, who, hang on, happens to be celebrating his 25th birthday.

When it happens in real life, it’s breathtaking.

Two days on from his 143 amid swirling sands, Sachin Tendulkar scored another majestic hundred in a tall chase, to almost singlehandedly put the Sharjah tri-nations cup in India’s hands. More than that, the quality of his batting ensured that this tournament – a cola-flavoured tri-series in an ocean of cola-flavoured tri-series – will transcend its immediate context and live in the memory well beyond the careers of those involved in it.

Decades from now, highlights of this tournament will fill our TV screens whenever April 24 comes along, bringing us the gleeful faces, fated never to age, of the fans who – as Tony Greig put it two days ago – danced in the aisles. We’ll still be talking about Shane Warne going round the wicket, and Tendulkar greeting the move by jumping out of his crease, exposing all three stumps, and launching the ball out of the footmarks and over long-on for six. The cover drives, the back-foot punches, the paddle-sweeps, the straight drives off Damien Fleming and Warne, respectively, that left Sourav Ganguly and Steve Bucknor, respectively, on their backsides; these will remain seared in our memories.

But for all that, Tendulkar has scored – and will score – hundreds far more challenging than this 25th birthday bash. Australia’s attack contained only three frontline bowlers, leaving batting allrounders Tom Moody, Mark Waugh and Steve Waugh to fill at least two-fifths of their bowling quota. During certain stretches of Tendulkar’s innings, all he had to do was milk these lesser bowlers for singles to the deep fielders, singles that Australia were happy to give away in the low-intensity waiting game that the middle overs of ODI innings often are.

Australia’s lack of genuine wicket-takers, apart from Warne and Fleming – who, incidentally, was celebrating his 28th birthday – forced them to play this waiting game and hope for India to crumble under scoreboard pressure. This could have happened had India lost a couple of early wickets, or – as they did in the last round-robin game two days ago – a couple of quick wickets midway through their chase, but they didn’t, as Ganguly, Nayan Mongia – once again promoted to No. 3 – and Mohammad Azharuddin all played useful hands around Tendulkar. Without those wickets, the target Australia set – 273 – was challenging but not nearly enough given their bowling resources, and given Tendulkar’s astonishing form.

Australia could have set a bigger target had they not lost clumps of wickets at inopportune moments. There were three within the first six overs of their innings, when the naggingly accurate Venkatesh Prasad and the nippy but far more erratic Ajit Agarkar got the ball to nibble around off a surface with a bit of moisture in it. There were two more following a 59-run fourth-wicket partnership between Adam Gilchrist and Michael Bevan, both against the run of play. Gilchrist top-edged a loose cut off the part-time offspinner Hrishikesh Kanitkar, Bevan was run-out after a mix-up that left him and Steve Waugh at the same end.

Being five down with 23 overs remaining didn’t hurt Australia immediately, as Steve Waugh and the brilliantly inventive Darren Lehmann put on 103 off just 96 balls, clinically milking the part-timers and taking toll whenever Agarkar – who still showed signs of the groin strain that kept him out of India’s previous game – erred in line or length. But even the exaggerated depth of Australia’s batting – the flip side of playing only three frontline bowlers – was tested when Waugh holed out in the 43rd over. Lehmann pressed on – the highlight of his innings a pair of back-to-back boundaries off Anil Kumble, a muscular leg-side six that he followed up by making room to carve a middle-stump ball through point – but his dismissal for a 59-ball 70, followed by the needless run-out of Damien Martyn, ended the chances of an explosive Australian finish. Only 67 came off their last ten overs.

India have always been nervy chasers, though. Before this game, they had only won five of the 27 ODIs in which they had been set a target of 270 or more. Their nerves must have eased when Ganguly hit the first two balls of India’s innings to the boundary, even though Australia kept him in check thereafter, and kept him on strike. By the time he fell to a mis-controlled pull for 23 off 42 balls, Tendulkar had only faced 11 balls.

But those 11 balls had already whetted the appetite of the packed crowd, containing drives of pristine timing as well as a moment of the sort of early luck – an inside-edged attempt at shouldering arms, off Fleming, that missed off stump by half an inch – that tells everyone this could be the batsman’s day.

And it was. Tendulkar put Moody under pressure as soon as he came on, pulling a good-length ball for a boundary over midwicket, and a thumping straight four from Mongia at the end of the over – the 14th – forced Steve Waugh to take the allrounder off. Moody’s replacement, Mark Waugh, then got the Tendulkar treatment, with three fours in his second and third overs – an inside-out loft over extra-cover, a leg glance and a paddle-sweep – forcing another change.

At the other end, Warne was getting through his overs without causing either Tendulkar or Mongia to worry unduly, and a switch to round the wicket in his sixth over further reduced his threat. The return of Fleming brought the immediate wicket of Mongia, but he gave way after only two overs – which Tendulkar saw off with almost exaggerated care – following which Tendulkar and the new man Azharuddin milked the twin medium-pace attack of Moody and Steve Waugh for six straight overs. The required rate crept up above six an over in this time, but it meant little without wickets falling.

Then came the acceleration: there was a boundary in each over from the 35th to the 38th, and then the flicked single that brought Tendulkar his hundred – his 15th in ODIs. Then came a brace of fours from Tendulkar in Warne’s final over, the 42nd – unstoppable drives down the ground and through cover – a fitting finish to an extended contest that Tendulkar has thoroughly dominated over these last two months, beginning at the Brabourne in the last week of February.

Tendulkar’s increased aggression in this phase also caused him to play and miss at four slower balls from Moody, but this was his day and no one could do anything about it. As if to stress that point, he walloped Moody for a straight six that brought the equation down to 39 from 43 balls. This match was done and dusted.

When Tendulkar finally departed, it was to a shocker of an lbw decision from Javed Akhtar – the ball, delivered from round the wicket by Michael Kasprowicz, pitched outside leg stump and would have missed off stump. Tendulkar’s 143 two days ago also ended with a questionable umpiring decision. It was fitting, in a way; Australia could get his wicket, occasionally, but to borrow lines written years ago in praise of another Mumbai batsman, they couldn’t out him at all.