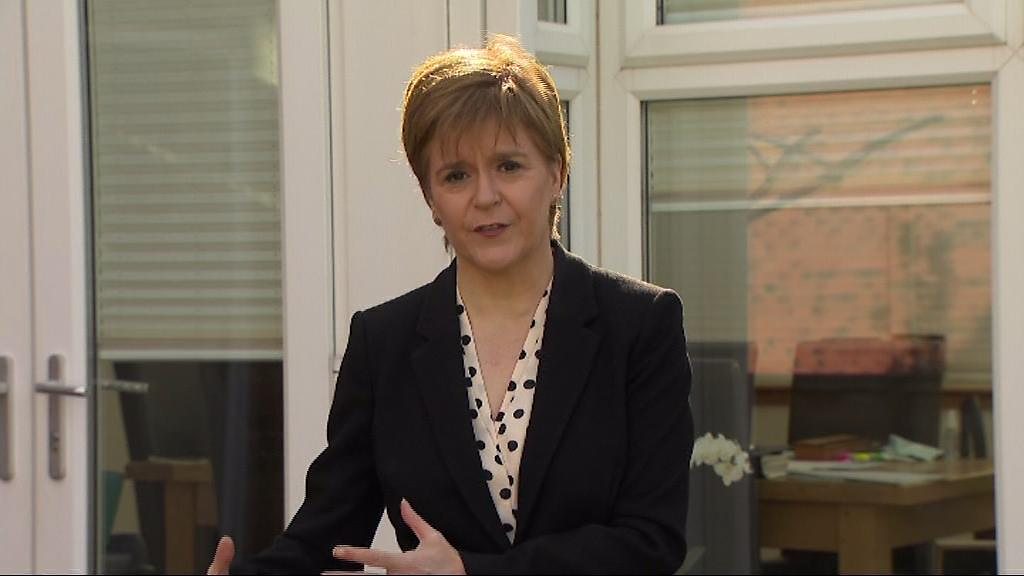 Nicola Sturgeon says Scotland could have a different exit from the Covid-19 lockdown if she felt the UK government had taken “premature” decisions.

The first minster told the BBC she would do what she judged best to protect Scotland’s population.

But Ms Sturgeon added she would not take a different path “for the sake of it”.

“It’s not political in any way, shape or form,” she told BBC One’s Andrew Marr Show.

A total of 1,249 people have died after testing positive for coronavirus in Scotland, according to the latest Scottish government data.

Statistics published on Sunday showed that another 18 people had died with virus, though the actual number of deaths is much higher.

The UK’s total hospital death toll of those infected with Covid-19 passed 20,000 on Saturday.

The first minister said lifting lockdown measures that have been in place since 23 March and renewed for a further three weeks on 16 April would not be the “flick of a switch”.

“As we do start to ease them, there will be a real need for caution and a slow, gradual process,” she said.

Asked by Andrew Marr if she would like to close the border between England and Scotland so she could pursue a different strategy, Ms Sturgeon said she had no power to do that.

“I don’t have the power to close borders but these are discussions of course we want to continue to have with the UK government,” she said.

“On this question of will Scotland do things differently – not for the sake of it we won’t. Only if the evidence and our judgement tells us that that is necessary.

“If the UK government took decisions that I thought were premature in terms of coming out of the lockdown, than clearly I would want to make sure that Scotland did what I judged was best to protect the population.”

Ms Sturgeon told the BBC it was important to have simple and consistent social distancing measures across the UK as the virus “doesn’t respect borders or boundaries”.

She added: “I think that’s still the starting point but I think we all have to take decisions that we judge to be right.”

Speaking later on the same programme, Foreign Secretary Dominic Raab told Andrew Marr there would not be a “binary easing up of measures”, but careful steps to find a “new normal”.

“We need to take a sure-footed way forward that protects life but also ensures our way of life,” he said.

Mr Raab, who has been deputising for Boris Johnson while he recovers from coronavirus, said social distancing measures would be “with us for some time”.

He added that the virus should not be allowed to come back for a “second spike” which could result in a second “protracted lockdown” and be bad for public health and the economy.