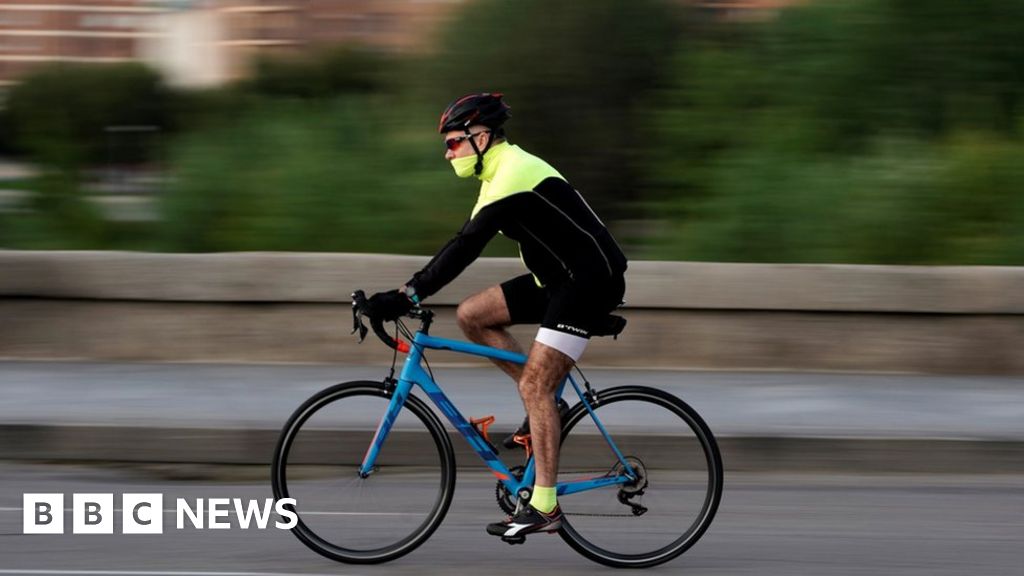 Spanish adults are jogging and cycling again for the first time after seven weeks of coronavirus lockdown.

The lockdown – one of Europe’s strictest – was eased for children a week ago, yet the amount of outdoor exercise time remains limited.

Spain’s official death toll is 24,824, but the rate of fatalities has dropped.

Italy has Europe’s highest death toll, followed by the UK and Spain.

In Barcelona, runners and cyclists crowded paths near the beach on Saturday, Reuters news agency reported.

Jesus Gutierrez said “it’s basic, for physical and mental health, it is basic to allow people to do sport”.

Since 14 March people have only been allowed to leave the house to buy food or medicine, to go to work if working from home was not possible, or to briefly walk the dog.

A normal Saturday? Not quite

Spaniards have made the most of the latest easing of the national lockdown, as they have taken to the streets in droves since early this morning.

The lifting of exercise restrictions for adults meant that thousands of joggers, walkers and cyclists were able to go out purely for leisure in Madrid and other cities, for the first time in seven weeks.

In many areas, the large numbers who took to the streets made it look almost like a normal Saturday morning, yet social distancing was observed and few cars were on the roads.

Other sports were also practised. In the southern province of Cádiz, surfers returned to the water this morning, although regular swimming remains prohibited.

Some, however, remain reluctant to venture out.

“I want to go out because it’s a beautiful day,” said Carmen Pérez, a 65-year-old in Madrid. “But I’m a bit scared of getting infected.”

Until last week Spain was the only country in Europe where children under 14 could not leave home at all.

From 12:00 to 19:00 only children aged 14 and under are allowed to go outside, accompanied by an adult. The remaining slots are set aside for elderly and vulnerable people.

Teenagers aged 14 and above can go out for exercise once in one of the adult slots.

Lockdowns in other European countries are also being eased, though social distancing remains in force. Some countries require mask-wearing in shops and on public transport.

Small shops reopened in Austria two weeks ago, but now all stores are permitted to start up business again. Hairdressers and beauty salons are also allowed to operate.

Hungary is allowing business travel from some countries.

And in Germany, churches, museums and playgrounds will open on Monday.

On 18 May it is planned that outdoor workers, including builders, will return to their jobs. DIY and hardware stores will reopen.

From that date, Mr Varadkar said, it would be possible to meet friends and family in small groups outdoors, and some sporting activity would be allowed, again in small groups.