This is the moment of maximum risk, Johnson says 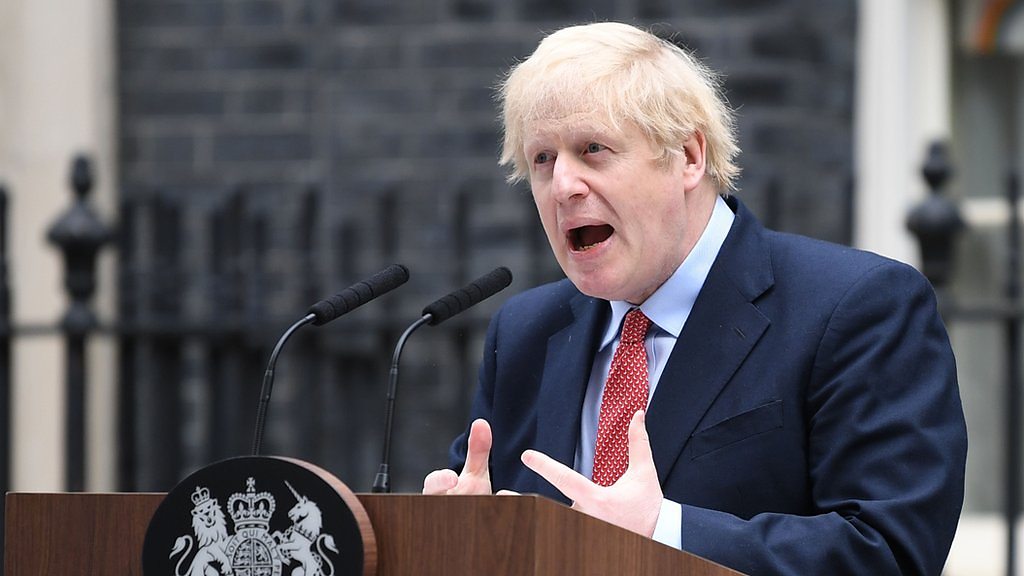 The UK is at the moment of maximum risk in the coronavirus outbreak, Boris Johnson has said, as he urged people not to lose patience with the lockdown.

Speaking outside No 10 for the first time since recovering from the virus, Mr Johnson said “we are now beginning to turn the tide” on the disease.

But he said he refused to “throw away” the public’s “effort and sacrifice” and relax the lockdown too soon.

The PM returned to work on Sunday after more than three weeks off sick.

Mr Johnson apologised for being “away from my desk for much longer than I would’ve liked” and thanked his colleagues who stood in for him – as well as the public for their “sheer grit and guts”.

In the speech on Monday morning, Mr Johnson said he understood concerns from business-owners who were impatient to end the lockdown.

But ending it too soon could lead to a second spike in cases and cause more deaths, “economic disaster” and restrictions being reintroduced, he said.

“I ask you to contain your impatience,” Mr Johnson added.

He said there were “real signs now that we are passing through the peak” – including with fewer hospital admissions and fewer Covid-19 patients in intensive care.

And comparing the outbreak to someone being attacked, Mr Johnson said: “If this virus were a physical assailant, an unexpected and invisible mugger – which I can tell you from personal experience, it is – then this is the moment when we have begun together to wrestle it to the floor.

“I know there will be many people looking at our apparent success, and beginning to wonder whether now is the time to go easy on those social distancing measures.”

Mr Johnson said the UK has “so far collectively shielded our NHS” and “flattened the peak” – but he could not yet say when or which restrictions would be lifted to ease lockdown.

Once the UK is meeting the five tests for easing restrictions – including a consistent fall in the death rate and making sure the NHS can cope – “then that will be the time to move on to the second phase” in the fight against the outbreak, he said.

But he added: “We simply cannot spell out now how fast or slow, or even when those changes will be made though. Clearly, the government will be saying much more about this in the coming days.”

And he added the government would make decisions with “maximum transparency”.

Labour’s environment spokesman Luke Pollard said he welcomed signs the government would be more transparent about exiting lockdown, saying the party had called for the government to publish its strategy.

After weeks away, Boris Johnson wanted to show that he is back behind the desk and taking charge.

The government has rejected any claims that his absence has seen a sense of drift.

But the prime minister, like or loathe his politics, can communicate in a way that his cabinet colleagues can’t.

He directly addressed those concerns, increasingly aired in recent days, including by his own MPs, about the effect that the lockdown is having on our economy. Also the evidence that some people are beginning to tire of the restrictions.

The overall message was that people need to hold tight: “Contain your impatience,” he said.

The risk of a second peak clearly remains a key driver in the government’s thinking.

But he sought to say too that the government understands that this can’t go on forever. To reassure people that the route out is being mapped out, even if it isn’t being spelled out.

However, intriguingly, he did promise more information “in the coming days”.

Mr Johnson was diagnosed with the virus a month ago. He was admitted to St Thomas’ Hospital in central London on 5 April and spent a week there, including three nights in intensive care.

He has not been doing any official government work during his convalescence at his country residence, Chequers, although last week he did speak to the Queen and US President Donald Trump, as well as meeting senior ministers.

Strict limits on daily life – such as requiring people to stay at home, shutting many businesses and preventing gatherings of more than two people – were introduced on 23 March, as the government tried to limit the spread of the virus.

Ministers are required by law to assess whether the rules are working, based on expert advice, every three weeks.

The next review is due by next Thursday 7 May.

Meanwhile, the government has until this Thursday, the end of April, to hit its target of carrying out 100,000 tests for coronavirus per day.

There were 29,058 tests carried out on Saturday, far short of the target.

How have you been affected by coronavirus? Tell us about your experience by emailing [email protected].