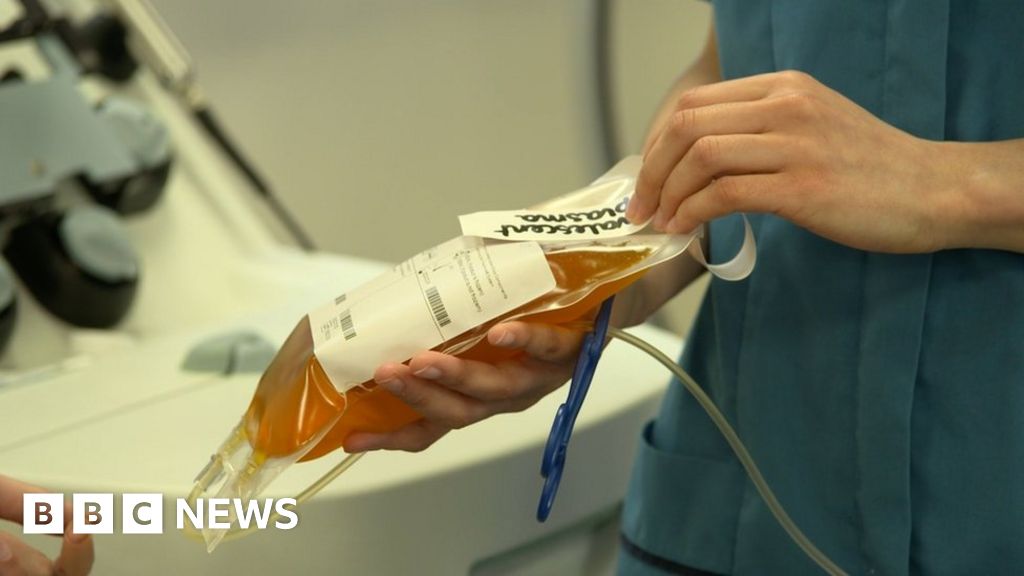 More than 6,500 people have registered their interest to take part in a UK trial to see if blood plasma from coronavirus survivors can treat hospital patients with Covid-19.

The hope from the trial, which has now started, is that the antibodies recovered patients have built up will help clear the virus in others.

In England, 148 people have donated so far.

Researchers are going through NHS data to find other people who have tested positive for coronavirus.

They will phone them to ask if they wish to be involved.

Donating takes about 45 minutes, as the blood is filtered through a machine to remove the plasma. The process is technically known as plasmapheresis.

When a person is infected with the virus, their immune system makes antibodies, which attack the virus.

These build up over a month and can be found in the plasma, the liquid portion of the blood.

It is hoped that by transfusing seriously ill Covid-19 patients with this so-called convalescent plasma, they can give their struggling immune system a helping hand to fight off the virus.

Dr Manu Shankar-Hari, a joint lead on the trial that will involve hospitals in all four nations, says that because this is a new virus “none of us have any protection in the immune system against it”.

The critical care consultant at Guy’s and St Thomas’ NHS Foundation Trust in London said: “What we are doing this trial is to give you instantaneous protection against the virus using an antibody that is developed by patients who recover from the virus.

“So the hope is that the viral clearance or the taking away of the virus in the body will be quicker by giving this treatment.”

At a special plasma donation session in Birmingham this week, donors were enthusiastic about the chance to help those currently hospitalised with the disease.

Jo Toozs-Hobson said she decided to take part despite being terrified of needles after her whole family got sick – her husband was in hospital for five days.

“I wouldn’t normally give blood but something came up on Facebook about this and I thought, I’ve got to do this because of the experience we went through,” she said.

As a junior doctor at Sandwell hospital in Birmingham, Zahid Sarfaz has treated patients with coronavirus but he has also been ill himself.

He says it has been a difficult experience but that he feels privileged and excited to help to try to find a cure.

NHS Blood and Transplant is also gearing up to collect and deliver plasma at a large scale if transfusions are shown to help patients.

Similar trials are already under way around the world.

The University Hospital of Wales in Cardiff hopes to offer the treatment as part of a study.

The US has already started a major project involving more than 1,500 hospitals and has treated about 600 patients.