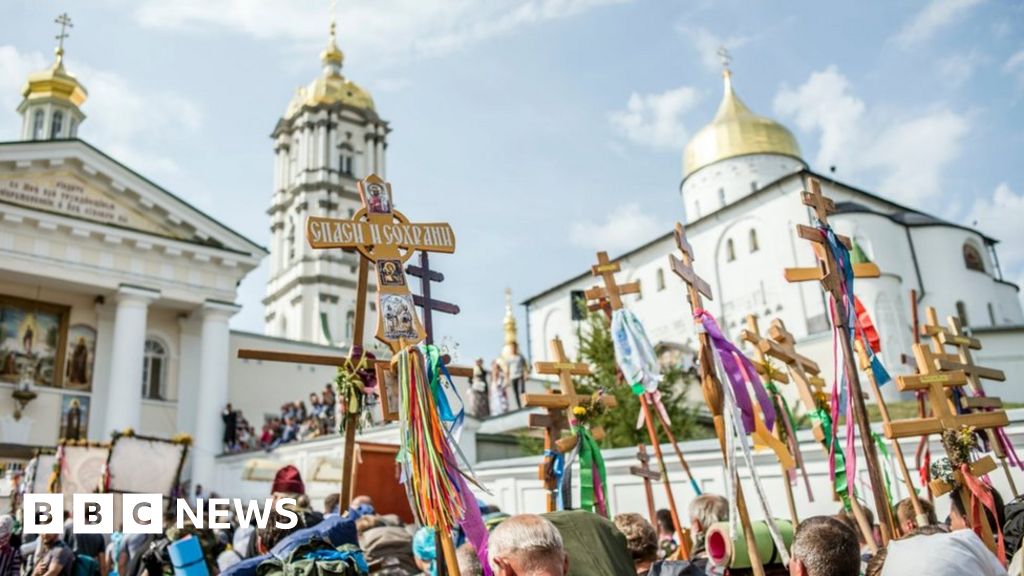 Police have stopped people going in and out of the Ukrainian town of Pochayiv after an outbreak at one of the largest Orthodox monasteries in Eastern Europe.

Dozens of people including priests have contracted coronavirus and some have died in the town where the 500-year-old Pochayiv Lavra is situated.

It is one of the most popular pilgrimage sites for Orthodox Christians from the whole region.

Authorities had already sealed off another ancient Orthodox shrine.

Some 150 people contracted the virus at the the Kyiv-Pechersk Lavra, one of the best-known Orthodox shrines in Ukraine and Russia.

Police blocked routes in and out of Pochayiv in western Ukraine on Tuesday and the monastery, which is inside the town but surrounded by an ancient wall, was closed to the public.

Pochayiv Lavra (monastery) belongs to the Ukrainian branch of the Russian Orthodox Church. Hundreds of thousands of pilgrims visit every year from Poland, Moldova, Russia, Belarus and as far away as Bulgaria.

Monastery authorities had denied there had been an outbreak but as long ago as late March the president of Moldova, Igor Dodon, said pilgrims who had visited the shrine had contracted Covid-19.

The town of Pochayiv has a population of 8,000 people and it is thought that priests will have had contact with many of the residents.

Ukraine’s government has not had access to the premises to conduct testing. But, over time, rumours emerged that an increasing number of monks had become infected and died.

The monastery denied that was the case. But the situation changed last week when four priests who live in the town tested positive for coronavirus.

Before the Orthodox Easter weekend, regional authorities urged Pochayiv Lavra to close its doors to public for the holiday, making clear the monastery had infected people living there.

However, hundreds of believers visited in defiance of a police ban.

On 20 April, it was reported that 13 new coronavirus patients were diagnosed in the town, including priests who had visited the monastery. A 43-year-old woman has died.

“Regional authorities have made the decision to completely block the town from 22 April,” Volodymyr Stefanskyi, the head of the council, told BBC News Ukrainian.

Lavra leaders denied they had an outbreak but on Tuesday the monastery told worshippers: “Take away the children, you should all leave Lavra. Nobody walks through the territory. If we do not, there will be great trouble.”

The monastery provides work for many residents in Pochayiv so it is thought authorities have been reluctant to put pressure on its leaders.

More than 80% of Ukrainians consider themselves Orthodox.