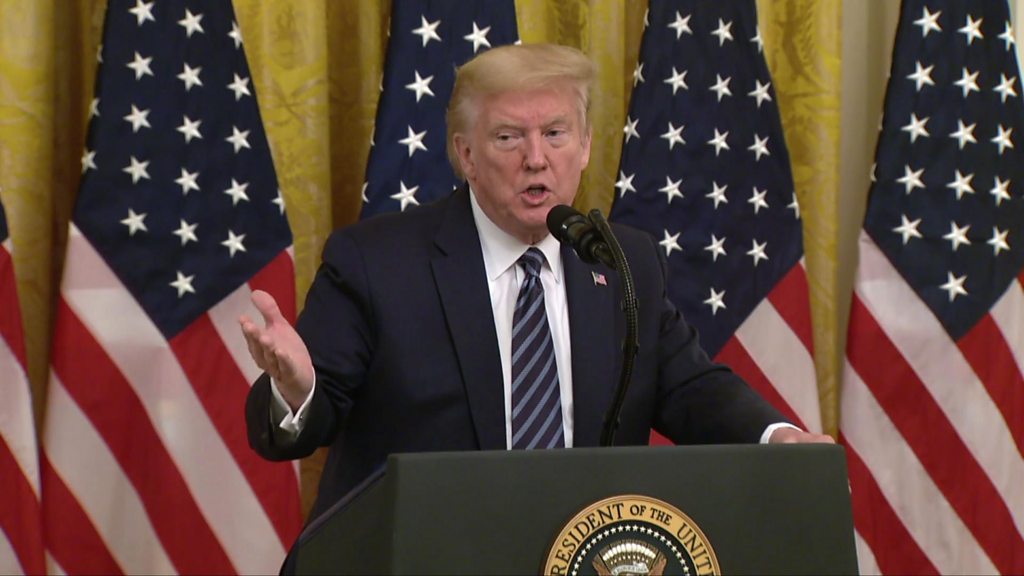 US President Donald Trump has appeared to undercut his own intelligence agencies by suggesting he has seen evidence coronavirus originated in a Chinese laboratory.

Earlier the US national intelligence director’s office said it was still investigating how the virus began.

But the office said it had determined Covid-19 “was not manmade or genetically modified”.

China has rejected the lab theory and criticised the US response to Covid-19.

Since emerging in China last year, the virus has killed 230,000 people worldwide including 63,000 in the US.

The pandemic has seen at least 3.2 million people infected, a million of them Americans, since the virus spread from the city of Wuhan.

What did Trump say?

At the White House on Thursday, Mr Trump was asked by a reporter: “Have you seen anything at this point that gives you a high degree of confidence that the Wuhan Institute of Virology was the origin of this virus?”

“Yes, I have. Yes, I have,” said the president, without specifying. “And I think the World Health Organization [WHO] should be ashamed of themselves because they’re like the public relations agency for China.”

He also told reporters: “Whether they [China] made a mistake, or whether it started off as a mistake and then they made another one, or did somebody do something on purpose?

The New York Times reported on Thursday that senior White House officials had asked the US intelligence community to investigate whether the virus came from a Wuhan research laboratory.

Intelligence agencies have also been tasked with determining if China and the WHO withheld information about the virus early on, unnamed officials told NBC News.

What did the intelligence service say?

In a rare public statement, the Office of the Director of National Intelligence, which oversees US spy agencies, said on Thursday it concurs with the “wide scientific consensus” regarding Covid-19’s natural origins.

“The [intelligence community] will continue to rigorously examine emerging information and intelligence to determine whether the outbreak began through contact with infected animals or if it was the result of an accident at a laboratory in Wuhan.”

It was the first clear response from American intelligence debunking conspiracy theories – both from the US and China – that the virus is a bioweapon.

What is the Wuhan lab?

The Wuhan Institute of Virology, which was founded in the 1950s, houses China’s first Biosafety Level 4 laboratory.

Such labs handle the most dangerous pathogens for which there are few available vaccines or treatments, and one of the areas the Wuhan facility studies is coronaviruses from bats.

Designed and built with French help at a cost of $44m (£35m), the lab opened in 2015. Many of its staff were trained at a similar facility in the French city of Lyon, Nature journal reports.

It is prestigious for China to have a Biosafety Level 4 lab with links to similar labs around the world.

What are Trump’s accusations against China?

Mr Trump has recently been escalating his war of words with China over the pandemic after what officials within the US president’s administration had described as a truce with Beijing.

On Wednesday, he suggested China wanted him to lose his re-election bid in November.

He has formerly accused Chinese officials of covering up the virus early on and saying they could have stopped the disease from spreading.

He has similarly criticised the WHO and withdrawn US funding for the global body.

China’s foreign ministry, meanwhile, has accused the Trump administration of trying to distract from its own problems tackling the crisis.

A ministry spokesman has also repeatedly promoted the idea – without evidence – that Covid-19 might have originated in the US.

According to the Washington Post, the Trump administration is looking into ways to punish China financially. Discussions reportedly include allowing the US government to sue China for damages or cancelling debt obligations.

How has Trump clashed with US intelligence before?

In January, he called US intelligence agencies “naive” on Iran and dismissed their assessment of the threat posed by North Korea.

His willingness to attack intelligence assessments goes back to his election in 2016, when he questioned an assessment that said Russia had interfered in the campaign.

He has continued to defend Russia against the accusation that it ran a campaign of cyber attacks and fake news stories to tip the vote in his favour despite US charges brought against Russian citizens.

The right moment for this fight?

President Trump’s offensive against China is largely about domestic politics and his re-election campaign but it threatens to accentuate a developing Cold War mind-set towards Beijing which may well come to dominate diplomacy in the months and years ahead.

Certainly there is much to criticise in China’s handling of the initial stages of the Covid-19 outbreak and it has shamelessly sought to make political capital from the crisis. Even Mr Trump’s Democratic opponent – Joe Biden – is doubling down on Beijing. But many analysts ask if this is the right moment to have this fight.

China’s rise has not gone as many in the West hoped. In its own region it is a military superpower – a match for the mighty United States. Its technological capabilities in strategic areas like 5G and artificial intelligence are impressive. And its wider influence – fostered through a single-minded effort to develop trade ties; financial relationships and so on – means that China is a force to be reckoned with, increasingly able to influence the international rules of the game.

Countering Beijing’s rising role will be the next US president’s central foreign policy challenge, while also trying to find ways to work with China on issues like climate change.