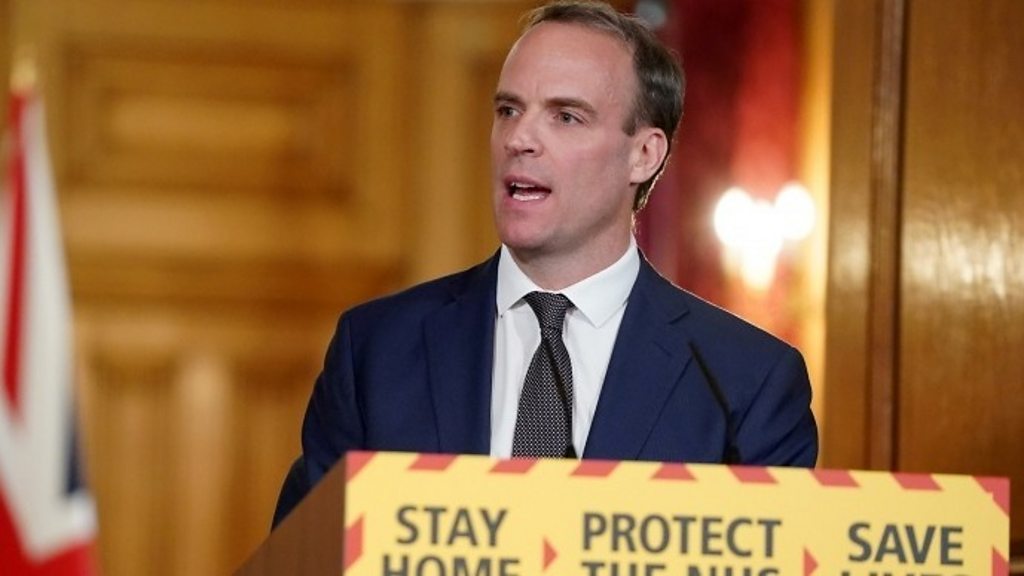 The number of people who have died with coronavirus in the UK has passed 26,000, as official figures include deaths in the community, such as in care homes, for the first time.

The foreign secretary said this did not represent “a sudden surge”, as the figure includes deaths since 2 March.

Dominic Raab also warned the UK was at a “dangerous moment”, saying that the peak of the virus had not passed.

The total only includes people who died after testing positive for coronavirus.

Meanwhile, figures show 52,429 coronavirus tests were carried out on Tuesday, still short of the government’s target of 100,000 tests per day by Thursday.

The total number of coronavirus deaths in the UK is 26,097, Public Health England said, including an additional 3,811 deaths in England since the start of the outbreak.

Of these, around 70% were outside hospital settings and around 30% were in hospital.

At the Downing Street briefing, the BBC’s health editor Hugh Pym asked why testing in care homes had not started sooner.

Mr Raab said such a move would have required “enormous testing capacity”.

He said that the government had expanded eligibility to include “anyone in a care home whether resident or staff”, but admitted there had been “a distribution issue”.

“There is no sugar coating the challenge we have had with that,” he said.

However, Mr Raab said the government was now doing “everything that we possibly can” to improve supply and delivery.

Asked whether deaths might have been avoided with better testing in care homes, Mr Raab said there was “always learning in an unprecedented crisis like this”.

“The key thing above all is to manage the ebb and flow of people into those care homes that might carry the virus,” he said.

PHE’s medical director, Prof Yvonne Doyle, said there had always been intervention where there have been outbreaks in care homes.

She said officials had “learned a lot about how the virus is behaving in different populations”, including how coronavirus affects people over 75.

“One of the reasons that the deaths are high there is that they demise quite quickly if they get the dose of this virus,” Prof Doyle said.

She explained that it may not have been possible for them to get to the test by the time the event happened.

Prof Doyle added: “Whether testing would have made a huge difference or not is impossible to say at the moment, and that’s one thing we want to learn.

“I think there are possibly more fundamental and structural issues about how care homes are run in an epidemic.”

On lifting the lockdown, the foreign secretary said he “did not know” whether the five tests for easing restrictions had been met because the government was waiting for update advice from the Scientific Advisory Group for Emergencies (Sage) in early May.

He said “until we are out of the woods”, the public should continue to follow social distancing guidelines.

Also at the briefing, Prof Jonathan Van Tam, the deputy chief medical officer for England, warned the virus would return if lockdown measures are not eased very carefully and said it was “premature” to discuss school returns.

On a possible return of outdoor activities such as beach trips, drinking in pub beer gardens or the opening of garden centres, he said: “We have to be extremely sure-footed and extremely painstaking about this. This virus will absolutely come back.”

He said: “This is with us for quite some time, potentially for as long as until we get a vaccine.”

These updated daily figures do not provide a comprehensive picture of what has happened so far because of the lack of testing in the community in the early days. Therefore, it means the figures are an underestimate of what has been happening.

But as more testing is rolled out, the daily figures from now on will provide a more accurate picture of what is happening than has been the case so far.

A better guide to the impact so far in care homes comes from figures published by the Office for National Statistics in England and Wales and its counterparts in Northern Ireland and Scotland.

That data shows to the middle of April – there is a lag in reporting because it relies on death certificates rather than positive tests – there had been over 3,700 deaths in care homes across the UK.

Given the number is rising, you could expect by now there will have been over 6,000 deaths in care homes – with half of coronavirus deaths probably now happening in care homes, as the number of new hospital deaths are coming down.

There are essentially two separate epidemics – one in care homes that is raging and one in the general population, who end up in hospital when severely ill, which is coming under control.

Where does that leave us in comparison with other countries? It is really hard to tell at this stage given the different ways information is collected and the fact other countries are at different stages of the pandemic.

But it seems reasonable to suggest the impact in the UK is pretty similar to that in Italy, France and Spain.

PHE said it has developed a new method of reporting daily Covid-19 deaths in England, to give a more complete number of those who have died from the virus.

The figures announced on Wednesday have been retrospectively revised by PHE since the first coronavirus death on 2 March to include additional data on deaths in the community.

From the start of the pandemic, the Department of Health and Social Care (DHSC) has reported a daily figure of Covid-19 deaths in hospitals in England, with deaths in other settings included from Scotland, Wales and Northern Ireland.

Prof Doyle said tracking the daily death count was vital to help understand the impact of coronavirus but acknowledged data from the Office for National Statistics includes suspected cases where a test has not taken place and would continue to include more deaths than the government figures.