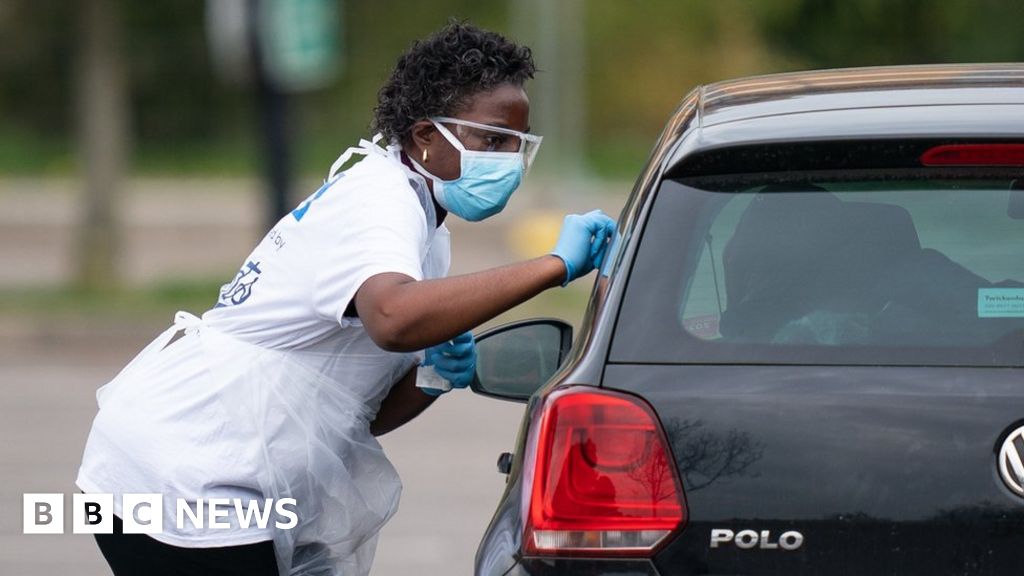 The UK is “quite likely to get very close to or meet” its target of 100,000 daily coronavirus tests, Transport Secretary Grant Shapps has said.

Health Secretary Matt Hancock said the government would achieve the aim by the end of April – which was Thursday – and those figures are expected later.

Just over 81,000 tests took place on Wednesday, but Mr Shapps told Question Time there had been capacity for more.

It comes as the PM said the UK was now “past the peak” of the outbreak.

Speaking about the target for daily tests on Thursday night, Mr Shapps said that “the point is to have available tests”.

A government source also told the BBC they were “fairly confident” that testing numbers “will be where our projections forecasted them to be”.

“But you can never take anything for granted,” they added.

Speaking at the No 10 briefing for the first time since receiving hospital treatment for Covid-19, Prime Minister Boris Johnson said the government was “massively ramping” up testing, and that the country was now “past the peak of this disease”.

The PM added he would set out a “comprehensive plan” next week on how to restart the economy, reopen schools and help people travel to work following the coronavirus lockdown.

Labour leader Sir Keir Starmer welcomed the prime minister’s commitment to outline a plan next week as “a step in the right direction”.

Mr Johnson said that to avoid the “disaster” of a second peak the UK must keep the R rate – the number of people to which one infected person will pass the virus – below one.

BBC political editor Laura Kuenssberg asked at what level the reproduction rate should be before the government would be “comfortable easing restrictions”.

The government’s chief medical adviser, Prof Chris Whitty, replied: “We are absolutely confident that the wrong answer is anything over one.”

He explained that as soon as the R rises above one you “restart exponential growth” and “sooner or later” the NHS would be at the risk of being overwhelmed. The current rate is thought to be between 0.6 and 0.9 across the country.

The government has set out five tests that must be met before lockdown restrictions can be eased, including:

The prime minister said it was “vital” to avoid a second peak “because that would really do economic damage”, adding that the UK must “unlock the economy gradually” while also finding ways of continuing to suppress the disease.

He said dates and times of each individual measure would be driven “by where we are in the epidemic”, and said the government was “being guided by the science”.

“What you’re going to get next week is really a road map, a menu of options,” Mr Johnson said.

Mr Johnson also said face coverings will be “useful” as part of the strategy for coming out of lockdown “both for epidemiological reasons but also giving people confidence they can go back to work”.

The Scottish government already recommends people use face coverings when in shops and on public transport.

And Mr Shapps told Question Time there was a “live discussion” within government about introducing new quarantine measures at airports for people coming into the country.

Also on the BBC One programme, former chancellor George Osborne said the country did not have testing “as quick as we’d like” and went into lockdown too late, but added: “The hospitals haven’t fallen over and the capacity has been built.”

Meanwhile, people across the country have taken part in the sixth Clap for Carers tribute to thank the NHS staff and care workers.

Mr Johnson was pictured clapping outside No 10, while fiancee Carrie Symonds – who gave birth to the couple’s son on Wednesday – tweeted she was joining in the clap and had “another wonderful reason to thank the NHS this week too”.

During the briefing, Mr Johnson also thanked the NHS and referenced his “very much happier hospital visit yesterday”.

The total number of deaths of people who have tested positive for Covid-19 in UK hospitals and the wider community is now 26,771, according to data published by the Department of Health and Social Care.

This is different to the total of 26,711 initially announced by Mr Johnson at the briefing.