US economy shrinks at fastest rate since 2008 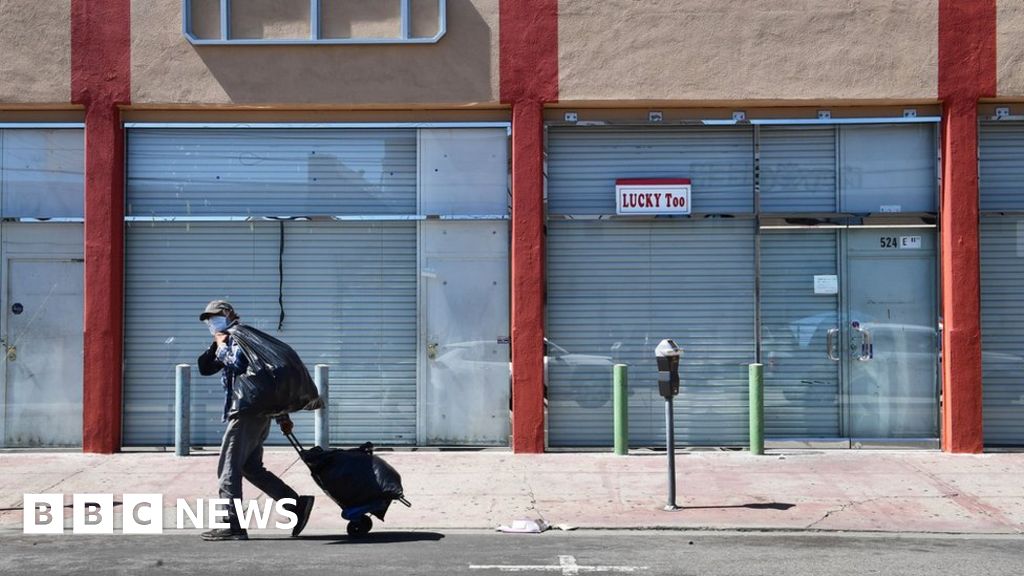 The US economy suffered its most severe contraction in more than a decade in the first quarter of the year, as the country introduced lockdowns to slow the spread of coronavirus.

The world’s largest economy sank at an annual rate of 4.8%, according to official figures released on Wednesday.

It marked the first contraction since 2014, ending a record expansion.

But the figures just hint at the full crisis, since many of the restrictions were not put in place until March.

The pandemic “is causing tremendous human and economic hardship across the United States and around the world”, policymakers at America’s central bank said on Wednesday.

The US has tried to cushion the economic blow with nearly $3tn (£2.4tn) in new spending, including direct payments to many families. The Federal Reserve has also taken with a slew of emergency steps, including lowering interest rates to near zero.

On Wednesday, Federal Reserve Chair Jerome Powell said the bank would maintain those levels until it was “confident that the economy has weathered recent events and is on track”. But he warned that the ongoing crisis would “weigh heavily” on the economy.

“Will there be a need to do more? I would say the answer to that will be a yes,” Mr Powell said at a virtual press conference.

Since mid-March, more than 26 million people in the US have filed for unemployment, and the US has seen historic declines in business activity and consumer confidence. Forecasters expect growth to contract 30% or more in the three months to June.

“This is off the rails, unprecedented,” said Mark Zandi, chief economist at Moody’s Analytics. “The economy has just been flattened.”

The contraction in the US economy is part of a global slowdown as a result of the coronavirus pandemic.

In China, where restrictions were in place for much of the quarter, the economy shrank by 6.8% – its first quarterly contraction since record-keeping began in 1992.

And on Wednesday, Germany said its economy could shrink by a record 6.3% this year.

“We will experience the worst recession in the history of the federal republic” founded in 1949, Economy Minister Peter Altmaier said.

Before the coronavirus knocked the global economy off course, the US economy was expected to grow about 2% this year.

But by mid April, more than 95% of the country was was in some form of lockdown. Although some states have started to remove the orders, they remain in place in many others, including major economic engines such as New York and California.

Many companies have warned of significant hits related to the pandemic as they share quarterly results with investors.

On Tuesday, General Electric said its revenues had fallen 8% in the first quarter, while Boeing – already in crisis after fatal crashes of its 737 Max plane – reported a 48% revenue fall, and said it planned to reduce output and cut jobs.

Despite the widespread warnings, share prices have increased in recent weeks after steep declines earlier in the year. Those gains reflect the Fed’s intervention, but not its forecast for the economy, said Seema Shah, chief strategist at Principal Global Investors.

“[Mr Powell] provided a very sobering assessment of the economic impact, acknowledging that this will not just be a short, sharp shock, but a more prolonged event,” she said.

“With financial markets being backstopped by the Fed for the foreseeable future, they will likely continue to signal a narrative that is very detached from the Fed’s own solemn economic assessment.”

The Commerce Department on Wednesday said consumer spending – which accounts for about two thirds of the US economy – dropped 7.6% in the first three months of the year.

Spending on food services and accommodation plummeted more than 70%, while clothing and footwear purchases were down more than 40%.

Health spending also plunged – despite the virus – as concerns about infection prompted doctors to postpone routine treatments and other medical care.

The economic pain in the US is expected to be even more severe in the April-June period, but economists say even the estimate for the first quarter is likely to be revised lower, as the government receives more data.

“It’s very difficult to gauge the depth of the decline,” Mr Zandi said. “We won’t really know the extent of the economic damage for years.”