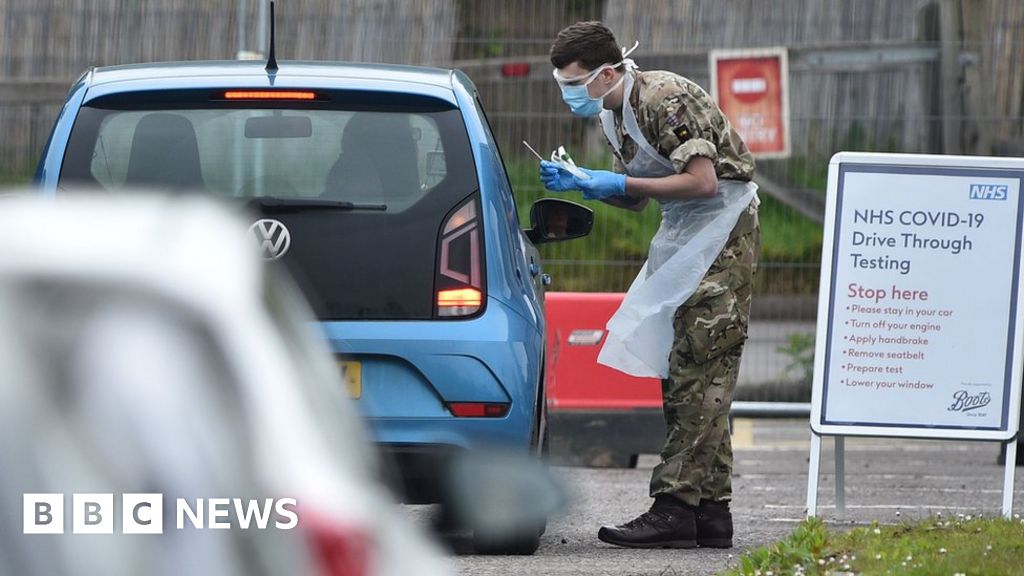 Up to 10 million key workers and their households can now book a coronavirus test online or through their employer.

The move allows all essential workers in England to register for tests on the government’s website, if they or a family member have virus symptoms.

Health Secretary Matt Hancock said the expanded testing programme was “part of getting Britain back on her feet”.

But the government remains some way short of its target of 100,000 tests a day by the end of this month.

Thursday’s figures showed 23,560 tests were carried out, though Mr Hancock said capacity had now increased to 51,000 per day.

The data also showed a further 616 people died with the virus in UK hospitals, bringing the total number of deaths to 18,738.

The health secretary announced the new testing arrangements at Thursday’s Downing Street coronavirus briefing, along with a commitment to recruit 18,000 people to trace contacts of those infected.

Those who can now register for a test include NHS and social care workers, police officers, teachers, those in the justice system, supermarket and food production workers, journalists and transport workers.

Previously, a smaller group of key workers – those whose work is deemed critical to the Covid-19 response – were eligible for testing.

Mr Hancock said once people enter their details online they will be sent a text or email inviting them to either book an appointment at a drive-through centre or to request a home test kit, though the latter are currently in limited supply.

A help desk has been established to aid the process, while mobile units run by the Army are travelling around the country to where they are needed, such as care homes.

The test involves taking a swab of the nose and the back of the throat.

Key workers who are unable to access the government’s website will still be able to apply for a test, as employers are able to book on behalf of their staff.

Until now, hospitals have been carrying out tests, along with a network of about 30 drive-through centres in car parks, airports and sports grounds.

But the drive-through centres have not always been in convenient locations, which may have discouraged people from getting tested.

Mr Hancock said the current capacity for carrying out tests was now “ahead of our plans”.

“Because capacity has now increased so substantially, we are now able to expand who can get the tests,” he said.

“Our ultimate goal is that everyone who could benefit from a test gets a test.”

The Welsh government has previously outlined plans to expand testing to key workers and Northern Ireland’s health minister has announced the nation’s testing programme is being expanded to include front-line workers in the private sector.

Scotland is prioritising tests for NHS staff and has yet to announce any expansion of testing to key workers.

Mr Hancock also detailed plans for a network of contact tracers that will be used when the lockdown is eased, insisting a process of “test, track and trace” would be “vital” to stop a second peak of the virus.

The hope is that regional outbreaks of the virus can be kept under control by isolating people with the virus, and then tracing their contacts and isolating them.

The health secretary said infrastructure would be put in place so that contact tracing can be rolled out on a “large scale”.

Labour’s shadow health minister, Justin Madders, told the BBC he welcomed the move to expand testing to key workers but questioned whether anything was being done to improve ease of access to the tests.

He said many people were having to drive for more than an hour to testing stations, which was probably “the biggest obstacle to people getting the test”.

Also at the Number 10 briefing, Prof John Newton, co-ordinator of the UK’s coronavirus testing programme, said the government was “on track” to reach 100,000 tests a day by the end of April.

He said new types of test – including ones that do not rely on reagents in short supply – would help to reach the target.

Are you a key worker who is planning to book a coronavirus test on the UK government website? Share your experiences by emailing [email protected].