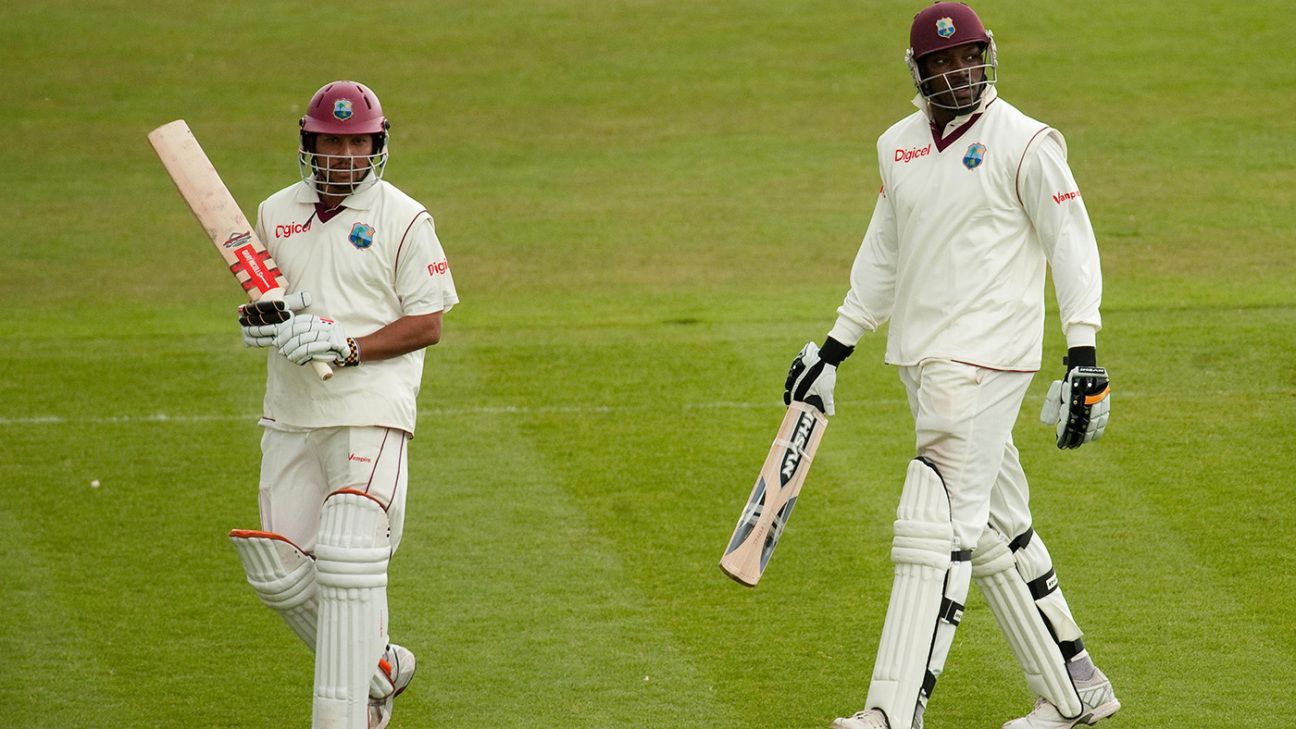 Chris Gayle has singled out former West Indies team-mate Ramnaresh Sarwan for playing a “big part” in Jamaica Tallawahs releasing him from their Caribbean Premier League set-up recently. In an outburst, released in a personal video on YouTube on Monday, Gayle also blamed Tallawahs’ chief executive officer Jeff Miller and owner Krish Persaud for “playing a game” with him and never keeping him in the loop about the team’s plans.

In a frenetic last-minute development, Gayle was signed by St Lucia Zouks for the 2020 edition of CPL, scheduled for August-September. Zouks will be the third franchise Gayle will represent in the CPL after two stints with Tallawahs (2013-16 and 2019) and a two-year stay with St Kitts and Nevis (2016-17).

Last season, Gayle had signed a three-year contract with Tallawahs, who had bought him as their marquee player at the 2019 draft. Gayle said he had always wanted to end his career in the “uniform” of Jamaica, his home team, but that dream now appears to be over, and Gayle laid the blame primarily on Sarwan, who he called various things, including “snake”, “vindictive”, “despicable”.

Alongside procuring Gayle, Tallawahs appointed Sarwan as the assistant coach last season. Gayle said Sarwan wanted to take over the head coach’s role from Donovan Miller, but the Jamaican was sure his former team-mate was not fit for the role.

“Sarwan wanted to be the head coach of the Tallawahs’ team,” Gayle said in the video, split across four segments. “I tell Sarwan directly: ‘Sarwan, you’ve no experience in being a head coach, it’s not an easy job’. He decided to say, ‘okay, whatever you want, you are the captain, no problem, we’ll leave it at that’. Not knowing that what I did was eating him out, so they made Donovan Miller the head coach.”

Tallawahs finished last in the six-team CPL last year with just two wins in ten matches. Gayle was their second-best batsman and the only one to record a century.

Gayle said Tallawahs had a “good” team last season, but were “traumatised” by Sarwan, who he claimed was close to Persaud. “Sarwan wanted to be the manager, he wanted to be the coach. But Sarwan is like the owner for the team because Sarwan go back and tell the owner what transpired within the team.

“Sarwan allowed these guys to come and make a mockery of me in front of the younger players while training is going on, so I decided to call the meeting and that’s when I flipped. It was a very heated meeting. The only thing left was just to get physical and it almost happened”

Chris Gayle on the 2019 season

Gayle claimed that it was due to Sarwan that he heard whispers from some of the Tallawahs’ overseas players about him not coming for the team training despite being the captain. Gayle said that it was not a secret that he did not always turn up for training, a routine he has followed worldwide in franchise cricket. To make sure his side of the story was heard, Gayle said he called a team meeting ahead of the team’s final match in CPL 2019.

“So Sarwan allowed these guys to come and make a mockery of me in front of the younger players while training is going on, so I decided to call the meeting and that’s when I flipped,” Gayle said. “It was a very heated meeting. The only thing left was just to get physical and it almost happened. I had to put everyone in his place, but I didn’t put Sarwan in his place. I left him. I say let his conscience ride him.”

Gayle recounted how Sarwan had always been trouble for him from as far back as their Under-19 days in 1996 when they were roommates. At the time, Sarwan’s complaints about Gayle watching TV late into the night forced head coach Gus Logie to evict the Jamaican from the camp in Barbados. Gayle said he had “forgiven” Sarwan but had not “forgotten” the incident, and felt that Sarwan hadn’t changed much.

“I am done with you”

Cricket West Indies is bound pay attention to Gayle’s remarks considering Sarwan has been one of the past players it has recruited to mentor the senior men’s team. Gayle said that as far he was concerned, he was done with Sarwan. “I can tell you this even if West Indies senior team take you up on board as a mentor, whatever reason, whatever franchise, any international team you are associated with, mi a bun you out (Jamaican slang for ‘I am done with you’),” Gayle said thumping his chest. “Hear? The team could’ve won a World Cup, me still mi a bun you out. I’ve to show you how deep this is. Wicked. Wicked. I might want entire Caribbean know that.”

Gayle said he would let Sarwan know the same in person if their paths crossed in the CPL. “Don’t hide behind the walls. You get your team, it’s your team. Run the team, Sarwan. Just don’t deal with me, I say it straight up. When I see you in person, I will tell you that, as well. Very deceitful and very disrespectful. We no friends.”

“Chris, we are not seeing your name here”

Gayle said he wouldn’t blame Persaud, but said the Tallawahs’ owner was “persuaded” to release him. According to Gayle, he had been in Guyana recently after being invited by a local politician who was a rival of the party Persaud supported. “Let me tell you why the Tallawahs didn’t really retain me now: this is all politics, alright. He [Persaud] has been persuaded to get rid of Chris Gayle, he’s not that type of person who will say ‘let’s get rid of Gayle’. You may say it’s nothing to do with politics, but it’s a big thing in Guyana. I am not into politics, you used politics against me to get me out of my own franchise. Kris Persaud, no love lost. You still have my respect, if I see you on street, still call you, franchise cricket is business at the end of the day.”

However, Gayle did not have the same sympathy for Jeff Miller, who was in constant touch with the player before the retention window shut on March 31. Miller told the Jamaica Gleaner on April 19 that Gayle’s fate would be decided by the owners, but hinted at an overhaul. “When you have a team that came last in the competition, obviously there are going to be changes, it can’t be business as usual,” Miller was quoted as saying by the newspaper.

“You may say it’s nothing to do with politics, but it’s a big thing in Guyana. I am not into politics, you used politics against me to get me out of my own franchise. Kris Persaud, no love lost”

Gayle on the machinations behind his exit

Gayle said Miller was “lying” and he was totally aware that he was not going to be retained. “Jeff Miller and Kris Persaud knew they didn’t want me. They knew a month in advance that I wasn’t going to be part of Tallawahs team. What they did was actually play a game with Chris Gayle. I don’t know what they were trying to accomplish.”

Gayle said Miller was in constant touch leading up to the retention date and even said the franchise was “struggling” financially. As a result, Gayle said he agreed to take a pay cut not once but twice, despite his contract saying he would need to be paid more every subsequent year. Gayle then heard from a third party that Tallawahs were going to release him. Miller laughed it off initially but then went cold.

Gayle said he “texted” Tallawahs’ Andre Russell to check if he was aware that the franchise was going to release him [Gayle]. Russell, Gayle said, was “straight up” and said the only thing he knew was the “possibility” of Floyd Reifer taking over as the head coach. “When I texted him, Russell did call me back and share his point of view because loyalty goes a long way.”

It was the CPL management that eventually confirmed the news to Gayle after Miller had submitted the final list of names Tallawahs had retained. “It has come to my knowledge that out of courtesy or respect, the CPL guys said, ‘Chris, we are not seeing your name here, what happened with you and the Tallawahs?’ I’m like, ‘What?'”

Gayle said he did not contact Miller, but he was hurt. “Jeff always talk of being a professional. But what I’m saying, you take black people for a fool. You take your own for a fool. You always trying to deprive your own black people, Jeff Miller. You’d have never done that with anyone else.”